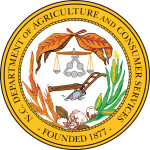 RALEIGH – The N.C. Department of Agriculture and Consumers Services was awarded the 2015 Marketing Excellence Award by the North American Agricultural Marketing Officials during the association’s annual meeting, held July 12-15 in Salem, Mass.

The award is presented to the top state or provincial agricultural marketing program in the United States and Canada. North Carolina was chosen from a pool of three finalists to receive the award for its rebranding of Got to Be NC, the state’s official identity program for agricultural products.

“The best part about our department is our employees,” said Agriculture Commissioner Steve Troxler. “This award is a great acknowledgement of the innovation, hard work and passion our Marketing Division has for promoting North Carolina agriculture.”

The Got to Be NC program was initially launched 10 years ago as an extension of the state’s Goodness Grows in North Carolina marketing program. In 2014, the department reintroduced the Got to Be NC brand, which helps consumers identify North Carolina agricultural products wherever they shop or eat. The department relaunched the brand through retail promotions, sponsorships, traditional advertising and social media over the course of the year.

In early 2014, Got to Be NC partnered with three state commodity associations – the N.C. Blueberry Council, N.C. Strawberry Association and N.C. SweetPotato Commission – to promote the three commodities in Ingles Market, Lowes Foods and Piggly Wiggly stores across North Carolina. The campaign included a series of in-store samplings, custom signage in the produce sections, and recipe tear sheets using the selected crops.

Got to Be NC also was a title sponsor for the highly successful Got to Be NC Competition Dining Series (www.competitiondining.com). The series consisted of single-elimination, “Iron Chef”-style battle between local chefs, with each contest featuring a secret N.C. ingredient.

The longstanding partnership has introduced chefs across the state to hundreds of locally sourced products including produce, meats, cheeses and specialty products. Often, the chefs that compete choose to use the selected items on their menus after the competition.

Traditional advertising and social media also played a role in NAAMO’s decision to pick North Carolina over other entries. The rebranding of Got to Be NC included a statewide advertising campaign and new television commercial with the tagline, “Grown. Raised. Caught. Made. Got to Be NC.” The department also launched an official Pinterest page to highlight recipes featuring North Carolina agricultural products and food businesses.

Got to Be NC represents more than 3,000 farmers, ranchers, fishermen and food businesses across North Carolina. More information about Got to Be NC Visit: www.gottobenc.com.