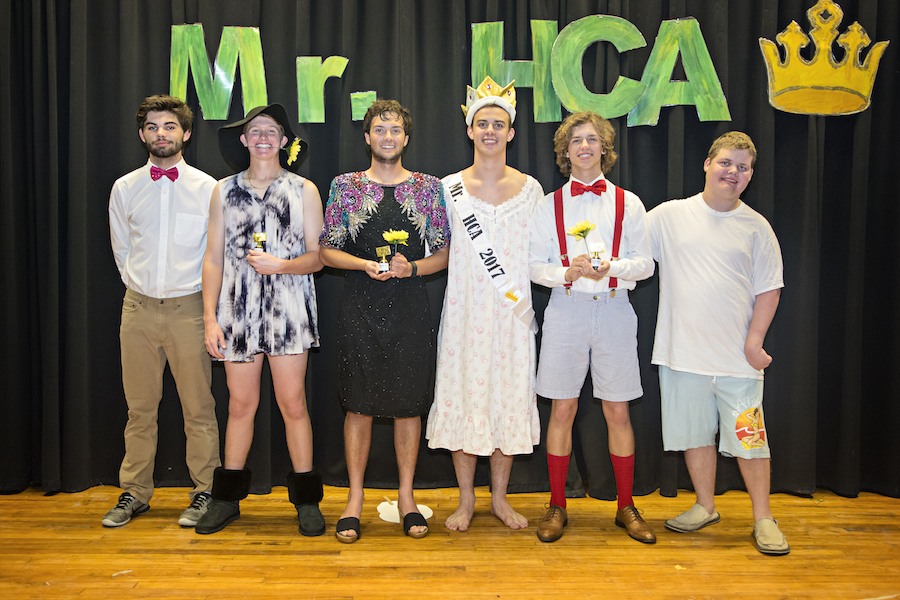 Harrells, NC  — Six contestants entertained a crowd of students and family members during Harrells Christian Academy’s fifth annual Mr. HCA Contest on Wednesday, April 6, 2017 in the Newkirk Auditorium.  By the end of the night, senior Amos Lanier was crowned the winner.

The evening was started with a rousing rendition of “It’s Raining Men,” with student-choreographed dancing performed by the contestants and Will Huff, Mr. HCA 2015-2016.  The program then continued with competitions in Pass-Time Wear, Mr. Legs, Talent, and Evening Wear.

The event was emceed by Huff, a senior, as well as John Litton Clark, a freshman, Madison Tart, a senior, and Abbigail Clark, a junior.  Entertainment portions of the program were also performed by Senior Beta Club members.

Reflecting on the event Beta Club sponsor Ruth Ann Parker stated, “Not only does Mr. HCA give students an opportunity to raise funds and awareness for a charitable cause, it provides an outlet for students to express their leadership and creativity.”  She continued on to add, “I am always amazed by their many talents and their willingness to serve others.”

Hosted by HCA’s Senior Beta Club, this event helps to raise money to support the group’s efforts in service as well as fund their award winning trips to both State and National Conventions.

This June the group will travel to Disney World for the National Beta Club Convention after placing in eight different competitions during the state convention in Greensboro two months ago, including two state titles.  HCA’s Junior Beta Club will also attend nationals in Florida after also placing in numerous competitions at their state convention.