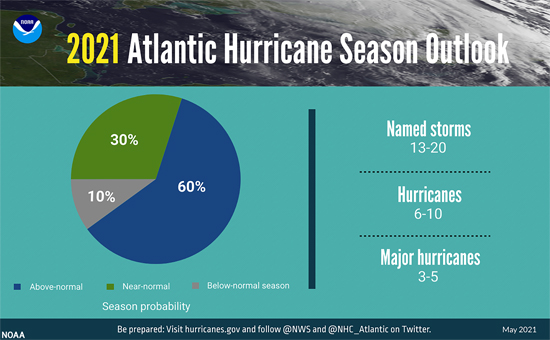 “Now is the time for communities along the coastline as well as inland to get prepared for the dangers that hurricanes can bring,” said Secretary of Commerce Gina Raimondo. “The experts at NOAA are poised to deliver life-saving early warnings and forecasts to communities, which will also help minimize the economic impacts of storms.”

Last month, NOAA updated the statistics used to determine when hurricane seasons are above-, near-, or below-average relative to the latest climate record. Based on this update an average hurricane season produces 14 named storms, of which 7 become hurricanes, including 3 major hurricanes.

“Although NOAA scientists don’t expect this season to be as busy as last year, it only takes one storm to devastate a community,” said Ben Friedman, acting NOAA administrator. “The forecasters at the National Hurricane Center are well-prepared with significant upgrades to our computer models, emerging observation techniques, and the expertise to deliver the life-saving forecasts that we all depend on during this, and every, hurricane season.”

Visit FEMA’s Ready.gov to be prepared for the start of hurricane season and the National Hurricane Center’s website at hurricanes.gov throughout the season to stay current on watches and warnings.