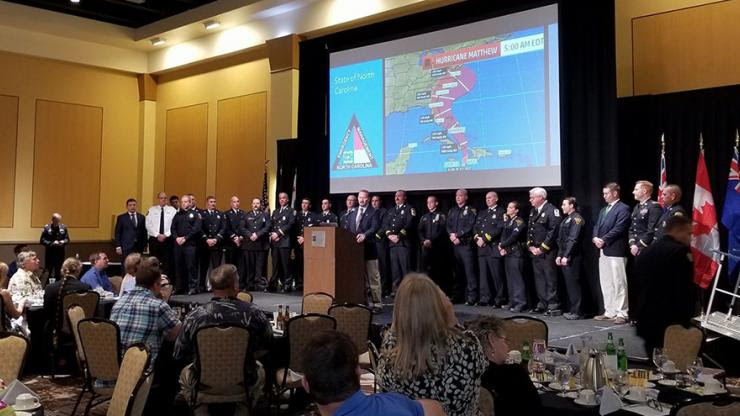 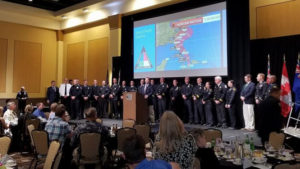 SOUTH BEND, Indiana – North Carolina has received the international Higgins and Langley Award for Outstanding Achievement in Swift Water Rescue for the coordinated local, state and federal response in October 2016 to Hurricane Matthew. More than 30 teams rescued 2,336 people and brought them to safety as Matthew’s floodwaters rose.  The premier internationally recognized award for excellence in swift water and flood rescue was presented last night during the annual conference of the International Association of Water Rescue Professionals in South Bend, Indiana.

“When the flood waters rose after Hurricane Matthew, these heroes put their lives on the line to save others,” Governor Roy Cooper said. “We’re grateful for their courage and their dedication to staying trained and ready to help whenever needed.”

“This award recognizes great work done by our local, state and federal water rescue teams, both in the water and in the air, rescuing thousands of people from Hurricane Matthew’s floodwaters,” said state Emergency Management Director Mike Sprayberry.  “These teams train constantly and their capability and professionalism shines though in all their responses.”

Established in 1993, the Higgins & Langley Memorial Awards honor of Earl Higgins, a writer and filmmaker who lost his life in 1980 while rescuing a child who was swept down the flood-swollen Los Angeles River, and Jeffrey Langley, a Los Angeles County firefighter, paramedic and swift water rescue pioneer, who lost his life in a helicopter incident in 1993. The awards acknowledge individuals and swift water rescue teams that use specialized technical rescue to save lives, increase awareness about the need for swift water and flood rescue training, promote worldwide training standards of certification, and inspire other agencies to develop viable water rescue programs.

The agencies contributing to the Hurricane Matthew rescue effort recognized by the Higgins and Langley board include:

North Carolina’s search and rescue capabilities were born in the wake of Hurricane Fran in 1996 when NC Emergency Management recognized the need to develop an inventory of available teams with basic rescue capabilities. The asset proved to be extremely valuable three years later during Hurricane Floyd when responders rescued hundreds of victims from flooded homes, cars, rooftops and trees. Floyd’s rescue operations highlighted the need for specially trained and equipped teams that could safely rescue those trapped in floodwaters or swift water conditions. Since then, the swift water / flood rescue teams and NCHART teams have become some of the state’s most activated specialized emergency response resources.