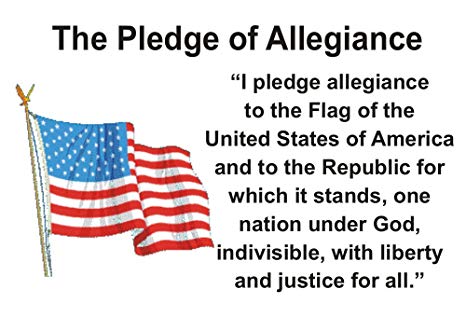 Since it’s Veterans Day, it seems a fitting time to urge people to be more patriotic.  I will start by calling out two  members of our local Board of Elections who do not see the need to pledge allegiance to our country’s flag.

According to the dictionary, to be patriotic means, having or expressing devotion to and vigorous support for one’s country. It seems our patriotism is taking a back seat to party affiliation and  personality conflicts. It should be a requirement of anyone serving our republic to pledge allegiance to the flag of the United States of America before they start to discuss the Republic’s business.

When someone stands and pledges allegiance to the American flag, they are not making a pledge to some politician who wants to hoard power as if we are under a monarchy or dictatorship. The pledge we should stand together and recite as “One Nation under God” is to remind us there have been Prisoners of War, Americans Missing and Killed in Action and to honor their sacrifice for our freedoms. It is to show we value this land that flows with milk and honey and do not take it for granted. We pledge our allegiance so that all will know that no matter what we are “Indivisible with liberty and justice for all!”

Now what has spurred this column is the lack of respect shown for our flag at a Bladen County Board of Elections meeting. The discussion between two of the board members on top of other acts of disrespect to our country seen across our nation only escalated my passion for justice and my desire to demand our Republic to hold unpatriotic people accountable.

I have waited many weeks to voice my opinion because I highly respect and admire the one who made the ultimate decision not to honor the flag at the meetings. She is an educator who has lead a life worth applauding. On the other hand, if the unpatriotic decision made by Ms. Louella P. Thompson, chairman of the Bladen County Board Of Elections is not addressed it will only add to the blind ignorance and destructive divisiveness causing our country to drastically deteriorate.

At the Bladen County Board of Elections meeting held on Tuesday, August 13, Ms. Thompson took questions from the  audience. She was asked why the board did not pledge allegiance to the flag before meetings. Then she had a follow-up question about having prayer before the meetings.

Ms. Thompson, did not call for the board to discuss the allegiance and flag matters, nor ask for a motion. However, she did state the importance of prayer and an invocation is said before each board meeting.

I commend Ms. Thompson for valuing prayer and pausing for it before she leads the meetings on the county’s behalf. However, if she and fellow board member, Mrs. Sheppard refuse to allow the pledge to be said before the meetings, they are just two more political leaders serving their self interests instead of seeking liberty and justice for all.

The potential cause and effect of local leadership was made blatantly clear when local students said an American flag was racist. This is a great example of how we need to lead by example “at home” before we can make changes anywhere else. While defending pledge protests on the grounds of freedom of speech is correct, “We the People in order to form a more perfect Union” should not tolerate those holding office unwilling to put personal matters aside and pledge allegiance to the country they are serving.

For those students who have been impressed that the flag is racist, my hope is they would meet the minorities, immigrants and the people making America the wonderful “Melting Pot” who work and serve to keep this land free of dictators and monarchs. I hope they are taught the Bill of Rights and the Constitution of the United States of America. May the students be taught opportunities are available because we live in a land for the people and by the people.

May the young and old remember the history of true Americans who overcame the odds to find their life, liberty and happiness. May our citizens not give way to those in power seeking to oppress with their wrong teachings and distracting arguments.

We the People need to stand up for our country and our rights as citizens. We need to get rid of any elected or appointed official unwilling to serve our nation as a whole. We need to demand the removal of any official who refuses to demonstrate their loyalty to “We the People” by rejecting our flag and dismissing the pledge of allegiance.

Constitution of the United States