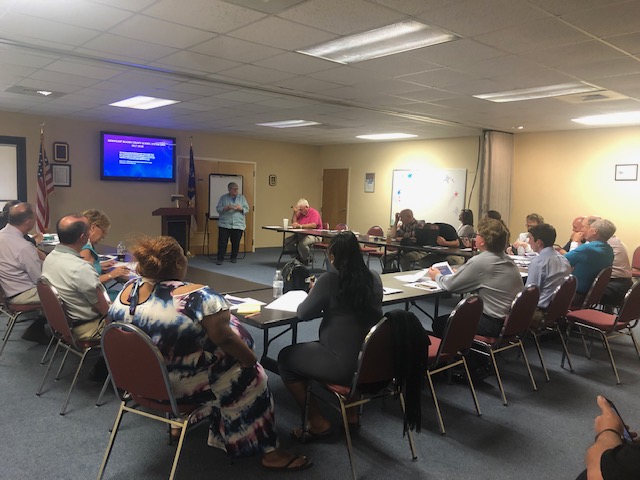 Following are the upcoming focus groups:

Thursday, August 15th at 6:30 p.m. the Focus Group will be for Healthcare Professionals. It will be held at the Bladen County Health Department located at 300 Mercer Mill Road.

Tuesday, August 27th at 9:45 a.m. the Focus Group will be for East Arcadia citizens at the East Arcadia Community Building located at 1645 East Arcadia Road in Riegelwood.

Tuesday, August 27th there will be another Focus Group held at the Dublin Volunteer Fire Department located at 324 South Third Street in Dublin to reach the Dublin and Tar Heel citizens. The meeting will start at 6:30 pm.

Thursday, August 29th there will be a Clarkton Focus Group for Clarkton Citizens located at Clarkton Town Hall starting at 6:30 p.m. The Town Hall is located at 81 North Elm Street in Clarkton.

More focus groups are scheduled in September, but Gantz said she would send out a survey link to help reach as many community members as possible for feedback.

Rev. David Foster confirmed the Bladen Baptist Association approved the request to allow the task force to offer Narcotics Anonymous meetings at their CWJC of Bladen County ministry building located at 509 S. Cypress Street in Elizabethtown. The first meeting will be Tuesday, August 19th at 7:00 p.m.

William Sellers with Eastpointe announced there will be a health, wellness and recovery event, “Honoring the Silence”, on Tuesday, August 27th in observance of the Overdose Awareness Month.

Rev. Kincy Barrow with Southeastern Carolina Crossroads announced there will be a Gospel Music Celebration held on Saturday, September 28, 2019 at Elizabethtown Middle School starting at 6:00 p.m. The celebration will be featuring “the eight time award winner, Brian Free & Assurance.” Also providing entertainment will be The Lumber River Quartet and Cedron’s Bridge.

Ticket prices are $25, $15 and $10 and may be purchased online by clicking here, or at the Bladen Baptist Association, Bladen Office Supply, or at Elizabethtown Healthcare & Rehabilitation.

A Back to School Blast was announced by Sondra Guyton with Bladen Community College. Saturday, August 17th, from 10 a.m. until 2 p.m. at the Cape Fear Farmers Market in Elizabethtown.

Last but not least with the announcements, Rachel Kilgore, M.Ed, LPC, with RHA Health Services said her company is now offering mental health services out of their new office located at 106 4th Street in Bladenboro.

The Opioid Task Force meetings are held the second Tuesday of each month at 2 p.m. in the Health Department Conference Room located at 300 Mercer Mill Road in Elizabethtown. Anyone interested in joining the fight against the opioid epidemic is welcome to join the group.

Local community members make going back to school a blast