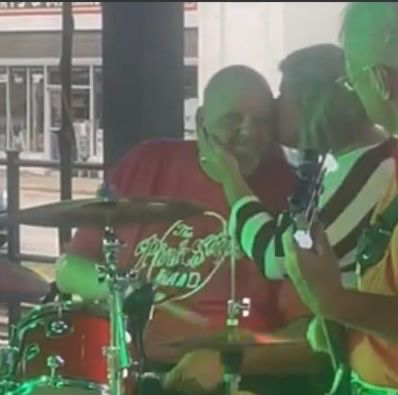 Frankie Burney was an accomplished drummer since high school, and throughout his adult life, he played the drums with various bands in his spare time. After a serious car accident, Burney was left unable to play the drums like he once could… until last night.

Yesterday was the 13th anniversary of Burney’s accident, where he lost his right arm, which was his dominant arm. This has not stopped Burney from staying involved in music. In recent years, he has been the sound engineer for local band, The Pink Slips. Last night, on a normal night as the sound engineer, Burney had the opportunity to be an on-stage drummer again in a miraculous display of determination and strength.

Burney has a special prosthetic arm with an attached drumstick, and that is how he played the drums last night, after much practice and learning how to drum again.

Burney said, “I’ve waited 13 years to do again what I used to absolutely love to do… play live music in front of a great crowd.”