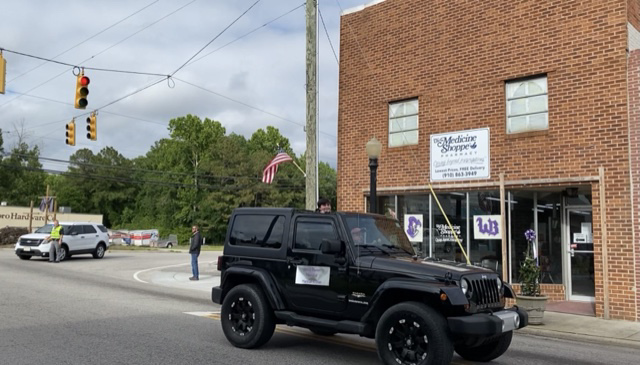 A crowd of people lined the roads in downtown Bladenboro for the parade showcasing the West Bladen High School graduating Class of 2021 and the Junior Marshalls. Parents decorated the downtown area with signs and ribbons.

Teresa Horton, owner of Lollie’s on Main in Bladenboro and a parent of one of the high school graduates, was excited about the parade. In her opinion, it would be nice to have a parade for the Bladen County high schools’ graduating classes every year.

Elizabeth Williams, was at the parade for her graduate and agreed with Horton’s statement. Williams said, “We should salute our children at all times.”

This marks the second year the graduating high school classes have been showcased in a parade before their Baccalaureate services. Both times the events were organized by the parents of the graduates.

Before leaving, the parents took down the ribbons honoring the graduates because it was Memorial Day weekend. The ribbons were replaced with patriotic ribbons to honor the Military Members who paid the ultimate sacrifice for freedom.

The graduates marched in to “Pomp and Circumstance,” and the Principal of West Bladen High School, Dr. Peggy Hester, welcomed all those in attendance.

View a video of the event on our YouTube channel linked below:

Miss Tara Rogers, SGA Senior Class President, read the scriptures from Philippians 4:4-9, “Rejoice in the Lord always. I will say it again: Rejoice! Let your gentleness be evident to all. The Lord is near. Do not be anxious about anything, but in every situation, by prayer and petition, with thanksgiving, present your request to God. And the peace of God, which transcends all understanding, will guard your hearts and your minds in Christ Jesus. Finally, brothers, and sisters, whatever is true, whatever is noble, whatever is right, whatever is pure, whatever is lovely, whatever is admirable-if anything is excellent or praiseworthy-think about such things. Whatever you have learned or received or heard from me, or seen in me-put it into practice. And the God of peace will be with you.”

Then Galeed Baptist Church Pastor Brett Young presented a message to the graduates about transitioning from high school into adult life.
“A lot will be expected of you moving forward,” Pastor Young said during his message, “… and it’s important that you seek to gain wisdom.”

After Pastor Young spoke, the worship team sang, “It is Well.” Before leaving, the seniors were awarded a complimentary refreshment from Sunset Slush, and Galeed Baptist Church held a drawing for door prizes. There were $25 gift cards to Walmart and the big winner, Cara Beth Lewis, received a 42-inch television.

The West Bladen’s Yearbook Staff also had a Senior Video available for viewing.