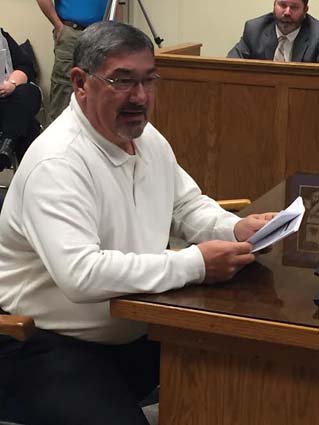 Larry Hammond started serving his country and his fellow man over 51 years ago, and he hasn’t stopped a day since then.

The Bladenboro native who now calls Clarkton home, Hammond served a little over 26 years in the United States Coast Guard, working his way up in the ranks from an enlisted man to an officer. Almost all officers are either Coast Guard Academy or civilian college graduates, but those who join as enlisted personnel and then work exceptionally hard have a very slim chance of being accepted into the officers’ program. These Coasties have been nicknamed “mustangs.”

“Yes, I’m a mustang,” Lieutenant Commander Hammond said, “and proud of it!”

A 1967 graduate of Bladenboro High School, he spent a year in college at Pembroke. He said that college was not right for him at that time in his life (though later the Coast Guard sent him to college and he did earn his bachelor’s degree).

“I wasn’t happy at Pembroke, but at 19, I knew I needed a career,” Commander Hammond said, “and I had always been fascinated by the work the Coast Guard did.” He added, however, that he had no idea of the vast myriad of jobs Coast Guardsmen did for the country until he joined. He went to talk to a recruiter but was told that, because it was during the Vietnam era, the Coast Guard was “kind of full.” He was offered the opportunity to take a skills test and did so well that he quickly got a call telling him the Coast Guard definitely had room for him after all.

The young Hammond joined the military on May 10, 1968, and said he planned to serve for four years and then do something else with his life. “But, I found a home in the Coast Guard,” he said, “so I stayed a little longer than I had originally planned.”

During his military service, Commander Hammond served in the aviation branch (as an aircraft mechanic), participated in many “search and rescue” missions, instructed new recruits in basic training, pulled a tour as a recruiter, headed up the communications aspect of the National Response Center, was a logistical planner to move military equipment from the east coast during Desert Storm, and was one of the few selected (though highly coveted) military personnel to serve on the Presidential Honor Guard. Commander Hammond is also one of a handful of non-Army military men to have “marched the mat” at the Tomb of the Unknown Soldier at Arlington National Cemetery.

Though usually a smiling, light-hearted man, Commander Hammond’s demeanor changed dramatically when he spoke of participating in the honors ceremony of wreath laying at the national cemetery in Washington, D.C.

“Arlington…,” he said with the look of a man who has had his very soul humbled by an experience, “…well, Arlington is just absolutely hallowed ground!”

During his time in the military, Commander Hammond pulled tours of duty on the Great Lakes in Detroit (Michigan), Mobile (Alabama), Yorktown (Virginia), St. Petersburg (Florida), Washington, D.C. (three tours in the capital), and Wilmington. And through his service, he has traveled to hundreds of other places, including Australia, California, Alaska, and Antarctica.

Within a four-month period, Commander Hammond crossed the equator, the Arctic Circle, and the International Dateline. He has rescued people off ice and out of freezing waters, been on a cruise breaking ice that was 14 feet thick, commanded Coast Guard troops for the inauguration of President Ronald Reagan, served on ceremonial detail when the 52 hostages were returned to the United States from Iran, participated in the death watch for General of the Army Omar Bradley, served as a sentinel at the Tomb of the Unknown Soldier, worked with Elizabeth Dole when she was Secretary of the Treasury, served on ceremonial detail when President Reagan entertained many Heads of State, and (when in charge of communications for the National Response Center) made sure the computer and phone systems were working perfectly for 14 different federal agencies (including the Federal Aviation Administration, the Federal Railway Administration, and the Environmental Protection Agency).

During his stint at the National Response Center, he gave pertinent information about national emergencies to the Commandant of the Coast Guard who turned around and briefed the President.

Commander Hammond’s medals and awards are numerous, but he doesn’t talk about them much. He would rather talk about the other men with whom he served.

“The people I met in the Coast Guard were the best, brightest, and bravest individuals ever,” Commander Hammond stated. “They do everything they can possibly do — every day of their service — for other people. I am honored to say I’m a part of the Coast Guard.”

The commander has stayed in contact with many of the other Coast Guardsmen he served with — some going back as far as 50 years. “The other ‘coasties’ become your family,” he said. “And they stay your family — forever.”

Commander Hammond recalls the names, personalities, and ranks of every coastie he served under or who served under his command. The dates that their careers crossed paths remain etched in his memory.

“The Coast Guard takes young recruits and teaches them to be servants to the people, rescuers of the lost at sea, and leaders in the areas of ethics and personal responsibility,” Commander Hammond said. “It is the finest, most unique organization ever formed.”

When the commander retired from active military service in 1993, his retirement ceremony was held on the deck of the USS North Carolina. Immediately after his retirement, Commander Hammond went to work as Bladen County’s Director of Veterans’ Services, Director of Elections, and Director of Geographic Systems and Enhanced 9-1-1. He wore all of these hats until 2011, when he retired from three of the agencies … but just couldn’t bring himself to leave his fellow veterans.

The Department of Veterans’ Services is open Tuesdays, Wednesdays, and Thursdays until about 3 p.m. The office is located in the Bladen County Health Department. Commander Hammond doesn’t have a secretary, an adminstrative assistant, or a receptionist. He is a one-man department — and even answers his own phone.

“I have an office for assisting my veterans, and then I have a little waiting area. When one veteran leaves, I just call out, ‘Next.’ It’s kind of like a barbershop,” he added with a laugh.

At the Veterans’ Services office, the commander helps veterans, their spouses, and their families file claims for veterans’ benefits. He can’t always get the results that veterans think they’re entitled to, but he always gives it his best. “We have to follow the laws, but if I can help, I certainly do,” he said. He helps all veterans — not just the ones from Bladen County.

He uses lots of resources and his state-wide network of contacts with other veterans’ agencies to help as many as he can. When he can help a veteran get benefits (often that they never thought they would get), Commander Hammond said he feels great gratification. There is no compensation or financial reward for him personally when one of his veterans gets life-changing benefits, but he said that doesn’t matter one bit to him. “I have helped a veteran,” he said. “And that’s enough.”

As Veterans’ Services Director, Commander Hammond receives no retirement or health benefits from the county. He is also paid by the hour. “I have enough time to do what I need to do for the veterans,” he said, “but my position does not take advantage of the taxpayers.”

At 70, Commander Hammond said he has thought about retiring, but that thought never stays in his mind for long. “I’m still in good health, and I still enjoy working,” he said. “I think I still have something to offer.”

The commander’s wife, Beth, is also very supportive of his work and very compassionate towards veterans. “If I even mention it [retiring], Beth will say to me, ‘But what would your veterans do without you?’ so I stay on,” he added.

As Veterans’ Services Director, Commander Hammond received the prestigious Order of the Long Leaf Pine, the state’s highest civilian award for those who have made significant contributions to the state and to their communities through exemplary service.

Commander Hammond and his wife have five grown children and one grandchild. He also has enjoyed umpiring high school and youth athletics for years. This past summer, he umpired in the Dixie Youth Baseball World Series, and he currently evaluates high school basketball and baseball officials.