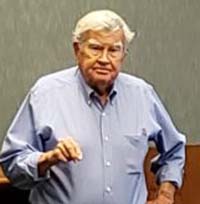 May 1st was the 80th birthday of Paul Butler, a White Lake resident. This year, instead of a traditional party, he decided to celebrate his birthday in a unique and charitable way. He sent a letter and $80, in one dollar bills for each year of his life, to 80 of his friends. He asked each of the recipients to spend the money in a manner that “eases the burden, dislocation or despair of someone impacted by the coronavirus pandemic.”

Butler (pictured above) explained in his letters that “the danger associated with this historic public health situation, as well as its adverse economic consequences,” were at the top of his mind. So, he decided to celebrate his special day by challenging his friends to do good for their communities in a “compelling and memorable way.”

The money can be spent to help a “local owned business, healthcare workers, first responder, service-providing organization, friend, neighbor or family member,” but it’s completely up to their discretion.

Frank Gorham, a friend of Butler and resident of Wilmington, received one of the letters. Gorham decided that he would spend his $80 giving back to Butler’s community. He reached out to the White Lake Police Department and spoke to Lieutenant Mike Salmon to get advice on how to help out. Gorham received several suggestions and even said that Salmon “spoke very highly” of Butler. He chose to send the money, as well as a matched amount from himself, to the Dublin First Baptist Food Bank in honor of Butler.

Gorham has the saying, “You can’t teach class. Someone has it or they don’t,” and he described Butler as someone who has class and that he’s honored to have as a friend. He said that this special birthday celebration was typical of Butler because he’s a “patriot, gentleman and person who really cares about helping others.”

Paul Butler gave a total of $6,400 of his own money to communities near and far. This charitable action is truly a special and creative way to commemorate his birthday. Each of his 80 friends who received this challenge can identify the perfect place or person in their lives to help out and ensure that Butler’s money is well spent.

To some Butler has taught a valuable lesson with this birthday celebration: It is better to give than to receive.