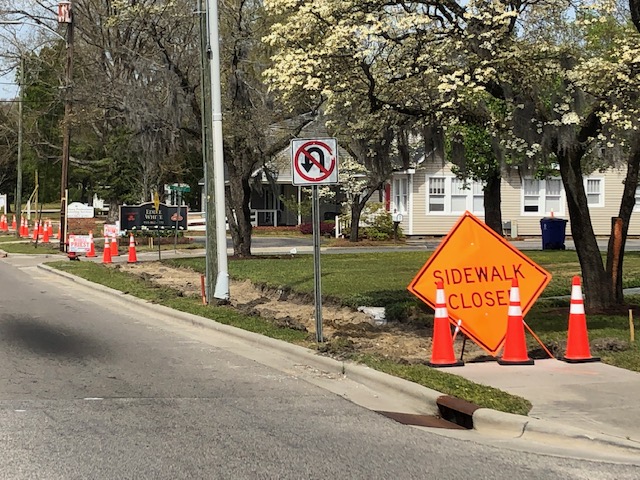 Phase II ahead of schedule in downtown Elizabethtown

04/24/2019
Phase II construction of the downtown revitalization project started in Elizabethtown at the end of March 2019. Many have noticed the work ahead signs lined up on West Broad Street in the downtown area.
The plans of the project have been in the works since June 2015. However, the pace of the construction work on the project seems to put the construction aspect of the project ahead of schedule.
“Construction is expected to be completed within six months, but they are on track to be done well ahead of time,” Eddie Madden, Town of Elizabethtown Manager said about the contractor providing the work on the project.
The revitalization project is based on a 2004 study performed by the NC Department of Commerce that indicated the town should undertake burying the overhead utility lines as a community enhancement project.  The town has divided the project into three phases. Phase I involved the downtown area, Phase II will include the area from Pine Street to Gillespie Street along NC Highway 87.

Currently, Directional Services Incorporated is working to install conduit in preparation for the burial of the overhead utilities on the north side of West Broad Street, according to Madden.  The town is also planning to install decorative street lighting that will complement the lighting in the Phase I revitalization.

“It’s a different fixture, however, we have incorporated the smaller decorative lighting in certain locations to tie together the first phase and to accent the downtown,” said Madden.

He added that the town also has plans to plant 18 Live Oak trees in the Phase II revitalization area as well. The trees will be planted in the fall of the year once the rest of the project is completed.

“We’ve had a good response from the residents for the live oak project,” said Madden.

Madden said that many residents through the years have commented how they missed the overhead canopy that once covered West Broad Street.

“We are trying to bring back the tree lined corridor everyone remembers,” said Madden of the Live Oak project. “Having all of the overhead lines buried will make an impact.”

There will be a third phase to the downtown revitalization project. Phase III will include the area along South Poplar Street to Cape Fear Valley-Bladen Healthcare. Madden said planning and preparation work on the Phase III revitalization will not start for several years.
Share: