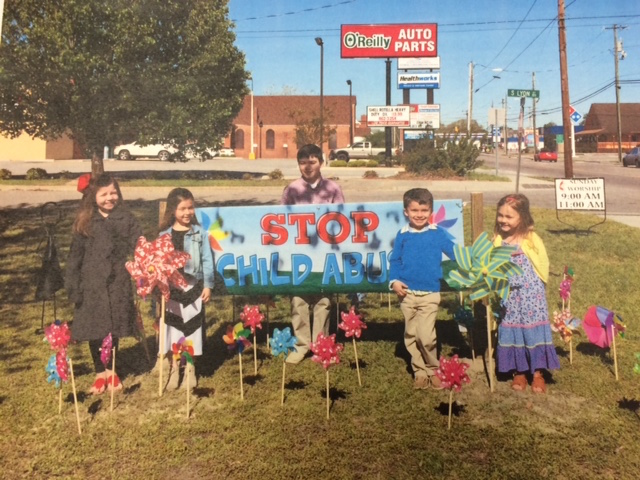 The Bladen County Department of Social Services celebrated Child Abuse Prevention Month in April with a Child Abuse Prevention Walk. They also conducted a community pinwheel contest in support of the event. Businesses and residents were encouraged to put their best pinwheel display together and submit them to the Bladen County Department of Social Services Child Protective Services Unit.  The winner was Trinity United Methodist Church of Elizabethtown.

Trinity UMC received a winners certificate and were also named at the event.

“Many businesses and community members participated and submitted their pictures to us,” said Jill Sampson, Child Protective Services Supervisor.

Sampson said that in 2008, Prevent Child Abuse America introduced the pinwheel as the new

national symbol for child abuse prevention through Pinwheels for Prevention. The pinwheel represents whimsy and childlike notions. It has come to serve as a reminder of the great childhoods we want for all children, said Sampson.

“Bladen County DSS would like to thank everyone who participated. We will be holding another contest in April 2017 and would like for the community to participate again next year, with hopes of planting the entire county in pinwheels,” said Sampson. “We will notify the community of upcoming events and fundraisers in the near future. Thank you all for supporting this worthy cause and for celebrating children and families in Bladen County.”