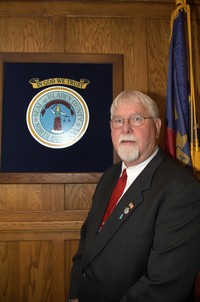 Across America, our brave policemen and women are under a concerted attack from the far-left. With a total disregard for the sacrifices police make for our safety, Democrats – from high-up elected officials to violent rioters in the streets – are encouraging crime by undercutting police at every turn. Now, Joe Biden and the far-left are pushing to actually defund the police, turning their disrespect for law enforcement into a dangerous policy objective. Here in North Carolina and across America, we must stand with President Trump as he supports our law enforcement against the radical left.

Unfortunately, in some cities, anti-police efforts have been successful. In each case, innocent citizens are worse off as crime rates soar. In New York City, Democrats cut police funding by over 17 percent. The result? Violent crime is skyrocketing, with shootings rising by 130% in the month of June compared to June 2019. In Portland, Democrat Mayor Ted Wheeler dismantled his Gun Violence Reduction Team under pressure from the far left. The result? Portland’s police chief is calling for help and support after the first weeks of July saw four times the shootings of the same period last year. Polling shows that a majority of Americans are concerned about rising crime in cities across our country.

When our leaders cave to the extreme demands of the far-left, crime skyrockets in the resulting vacuum. Unfortunately, Joe Biden – whom police groups disavowed back in June – has jumped headfirst into the left’s dangerous effort to defund law enforcement.

In a June interview, Biden voiced his support for defunding the police, endorsing the bad-faith policy of redirecting funds away from police departments. He followed this up in early July by saying that “police have become the enemy” and that their funding should “absolutely” be cut. Biden then openly sided with dangerous rioters by describing the ongoing violence in Portland as “peaceful protests.” The “peaceful” activities in Portland have in fact included burning bibles and American flags, attacking federal agents in a federal courthouse, and burning down police stations. If this is Joe Biden’s vision of peace, we can expect more violence if he’s elected.

Unfortunately, Democrats in Charlotte and Durham are now pushing for Biden-approved police defunding. This would have a devastating effect on our communities. If North Carolina were to adopt New York City’s 17% cut, we could see $545 million slashed from our state’s police budget. This could mean 5,700 fewer police officers, 6,600 more violent crimes, and a significantly longer response times for police officers in our community. As North Carolinians, we cannot let our state fall into the violence and anarchy currently taking place in American cities. We cannot let Joe Biden and his far-left handlers undercut our law enforcement.

President Trump, on the other hand, understands the importance of law and order and has supported our brave law enforcement officers at every turn. He has consistently fought to ensure that our police have the tools, training, and information they need to defend our communities. President Trump’s support for police led him to sign the Mental Health and Wellness Act into law, providing essential mental health services for the brave men and women who risk their lives keeping our communities safe. It’s no wonder that the National Association of Police Organizations, among numerous other state police groups, have endorsed President Trump for a second term.

Our police deliver for us every day by putting their lives on the line to keep us safe. It’s our turn to deliver for them. North Carolinians should choose President Trump’s pro-law and order agenda over Joe Biden’s radical attacks on law enforcement.