The same poll asked voters for their unprompted one-word responses when they heard the names “Donald Trump” and “Hillary Clinton.”

“Our latest poll is a good reminder that North Carolina remains a possible battleground state,” Civitas President Francis De Luca said. “That’s why we can expect the major presidential candidates to visit the state between now and the March primary election.”

The exact text of the relevant questions follows. (Totals may not equal 100 percent due to rounding.)

If the election for president were being held today, and you had to make a choice, for whom would you vote if the candidates were: 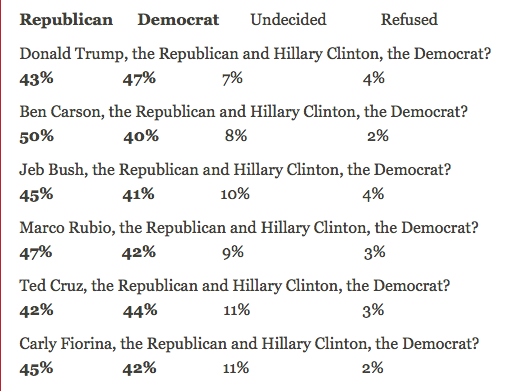 In the following questions, respondents were asked, without prompts or suggestions, to give their responses. Their answers are grouped by answer type for convenience.]

What single word comes to mind when I mention the name “Donald Trump”?

What single word comes to mind when I mention the name “Hillary Clinton”?

The poll surveyed 600 registered North Carolina voters, with 30 percent contacted on their cell phones. The margin of error is plus/minus 4 percent. The survey was taken Sept. 28-30.

Civitas President Francis De Luca will be available for interviews to discuss the poll and issues of the day. To arrange an interview, email Demi Dowdy at demi.dowdy@nccivitas.org or call 919.834.2099. Full release can be viewed online here.