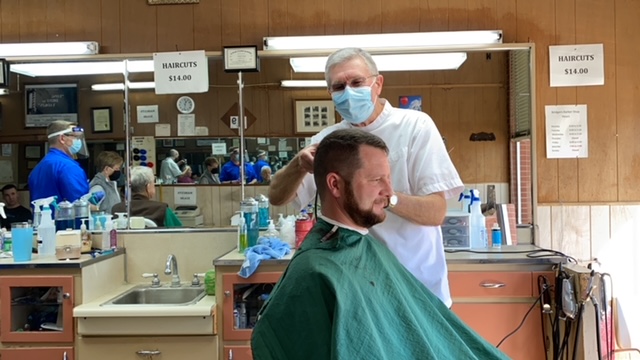 Sought after Barber, Dennis Hawes, began his career at Bridgers’ Barber Shop in downtown Elizabethtown 56 years ago on January 19. The small-town barbershop customers say there would be a line many days for patrons waiting on Hawes’ services.

Yesterday was no different as Mr. Hawes clipped and scissored the day away for what may be the very last time. Lifetime customer Robert Hester sat with a smile getting his hair manicured by the popular professional.

Hester recalled his first hair cut was given by Mr. Hawes about 43 years ago in the very same seat.

Russ Bridgers with Bridgers’ Barber Shop said Hawes gave notice of his retirement, and it came as a surprise. But Mr. Hawes explained, “At 76 years old, it’s time to go.”

When asked what he would do during retirement, Hawes said, “Nothing. I’m going to start late, take a long lunch, and quit early.”

Mr. Hester asked if he would still garden, but Mr. Hawes replied he did not think he would even do that. 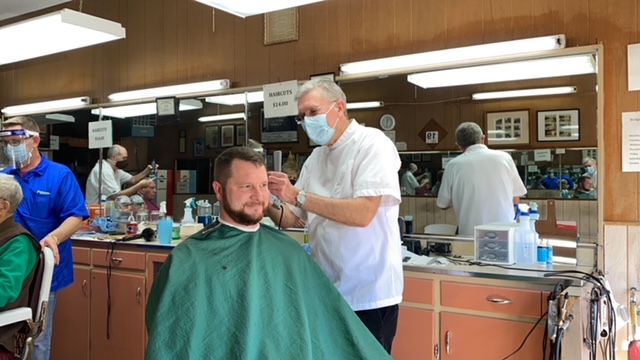 He added, “I’ll do what Ms. Martha tells me, but she doesn’t tell me much.”

Michael White, another Barber at the shop, said, “We hate to see him go! We hope he reconsiders, but I don’t think he will.”

“He was good at giving us advice,” Mr. White continued.

Joshing around, as seen regularly in the barbershop, Mr. Hawes replied, “I don’t know if they took it, but I gave it.”

When asked if he may reconsider his retirement and at least work on a part-time basis, Mr. Russ interjected, “We sure hope so, at least on Fridays!” Many in the shop, with heads nodding up and down, agreed with Mr. Russ.

Mr. Hawes smiled a handsome, humble smile and confirmed a part-time arrangement would not be likely. As the sunset and the blinds in the old shop closed yesterday, many wished Mr. Hawes the best in his retirement.

Video of Mr. Hawes in action over the years may be viewed on our YouTube channel linked below: