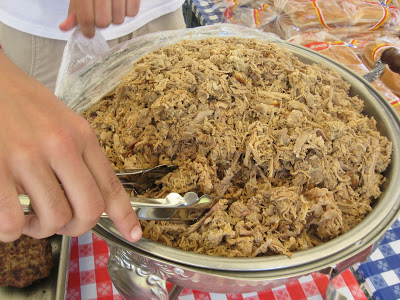 Pork & Beats Cook-off draws crowd from near and far

The Pork & Beats Festival is scheduled to start at 10 a.m. this Saturday morning. There is already a crowd drawn to the downtown area of Elizabethtown. The weather is not keeping the sanctioned BBQ Cook-Off competition from providing lunch starting at 11 a.m. Blackwater Rhythm & Blues Band, other entertainment, and vendors scheduled are still prepared to provide a day of celebration.

Town of Elizabethtown Director of Communications and Marketing, Mrs. Terri Dennison said the event is still expected to be successful, with the 23 cooks in the competition there will be a lot of BBQ plates.

She said, “We want to get the word out now that we are providing take-out plates for anyone wanting to just drop by and pick up a plate.” She reiterated the plates will be available starting at 11 a.m. and the bands and performers will be under shelter providing entertainment for the day.

Elizabethtown Police Department Chief Tony Parrish is one of the event organizers. He reported there are people from all over participating in the cook-off competition. The 2017 and 2019 North Carolina State BBQ Cook-Off Champion, Kevin Peterson from Benson, NC is competing in the event.

There are 23 participants in the sanctioned cook-off. One of the Pork & Beats Festival original organizers, Richard “Sling” Shaw is competing in the pork cooking competition.

The festival is to promote Elizabethtown and the hog industry, Shaw stated. The event is located in downtown Elizabethtown at the Cape Fear Farmer’s Market on Martin Luther King Jr. Drive.

Potential for the biggest Pork & Beats Festival is in the making