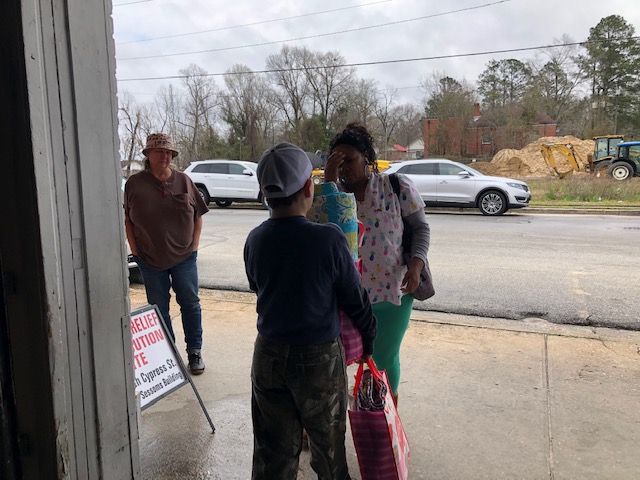 Victims of Hurricane Florence received a gift of a free quilt on Saturday morning courtesy of the ministry, Quilts of Compassion. Numerous victims from throughout Bladen County gathered at the Bladen County Disaster Distribution Center in Elizabethtown to receive the cherished gift. 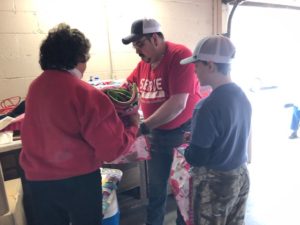 The faces of those who waited patiently for their turn to receive a quilt were immediately brightened as they watched their quilt being carefully folded and bagged and handed to them.

Janice Grimes, the Founder and Executive Director of Quilts of Compassion, said the quilts were made and donated to the ministry from organizations, churches and individuals throughout the United States.

“We want it (the quilt) to be a tangible reminder of God’s love and his goodness,” said Grimes.

She said the group learned of the needs in Bladen County following Hurricane Florence.  Grimes said initially, the location where the group intended to go in North Carolina, they encountered a lot of obstacles in getting there.

“I kept praying about it and I think that God wanted us to go further inland and I followed the Cape Fear River on a map and ended up seeing where Bladen County was,” said Grimes.

She said as she began to try and learn more about Bladen County and the impact of Hurricane Florence, she reached out to Tammy Keshler, who serves as the Hazard Mitigation Specialist for Bladen County.

“She explained to me about the town, what had happened (during Hurricane Florence), about the demographics, and I knew in my heart, that was where we were supposed to be,” said Grimes.

She said the trip on Saturday was not the first trip the group has made to Bladen County. Grimes said Quilts of Compassion made an earlier trip in December 2018 and they right away they would be returning to Bladen County.

“As long as we see a need and that we are being a blessing to those that have suffered loss,” said Grimes. “We just wanted to make a point to make sure that everybody knows they haven’t been forgotten.”

Grimes explained the ministry of Quilts of Compassion and how they help disaster victims.

“Our mission is bringing hope and encouragement to the hurting,” said Grimes.  She explained they do this by bringing handmade quilts to disaster areas and passing the quilts out to those that are in need. The group is currently celebrating its 20th year in ministry. The ministry is divided into three areas — quilting groups, pastoral care and disaster response.

“Our disaster response division was established in 2011 in response to the tornado in Joplin, Missouri,” said Grimes.

She said the group, which is headquartered in Toledo, Ohio, has distributed over 25,000 quilts made by quilters from throughout the United States over the past 20 years. In addition, Grimes said a few countries overseas have learned about the ministry and have also donated quilts.

When the Bladen County Disaster Distribution Center opened its doors on Saturday morning, individuals began to arrive shortly before 10 a.m. 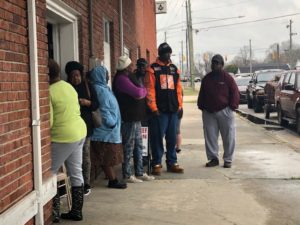 Patricia Bethea said she was there to pick up a quilt for her 94-year old aunt.

“Most of the damage she received was to her roof,” said Bethea of her aunt’s home in Elizabethtown.

One hurricane victim is displaced from her home in Hallsboro and is currently residing with relatives in Bladen County while she waits for repairs to be completed at her home. 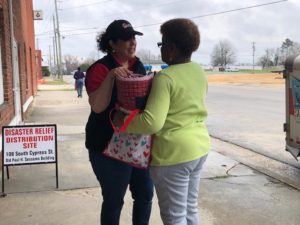 Kathy McKiver of Hallsboro said, “It’s tough living in somebody else’s home. It’s like living in a cage.”

While McKiver said she is thankful to have somewhere to stay, she is ready to return to her home in Hallsboro.

She recounted how the roof blew off her home during Hurricane Florence and water leaked inside leaving behind mold and mildew. McKiver said the home had to be gutted and FEMA denied her claims on the storm damage. McKiver has not given up hope. She said Keshler and others have been a great help in getting her assistance to get repairs made to her home.

McKiver described the quilt she received on Saturday as a blessing to her.

Another Elizabethtown resident, Mrs. McKoy, said her roof blew off and the ceiling collapsed in part of her rental home. She said she has had to move out while the owner works to get repairs made.

“It didn’t flood this time though,” said Mrs. McKoy.

She recounted that in Hurricane Matthew, her rental home was inundated with flood waters, but Hurricane Florence did not flood the home. Mrs. McKoy said was thankful for Quilts of Compassion and appreciated the quilt she picked up.

Tammy Keshler said she is employed as the Hazard Mitigation specialist with Bladen County Emergency Services and she received a telephone call from Ms. Grimes asking what the needs were in Bladen County.

“She (Janice Grimes) called me and I called Rev. Jason Williams and they set up the next day here (at the Bladen County Disaster Distribution Center),” said Keshler.

She said when Quilts of Compassion visited Bladen County in December, they traveled to Kelly and went door-to-door passing out quilts as well as setting up at the Bladen County Disaster Distribution Center. 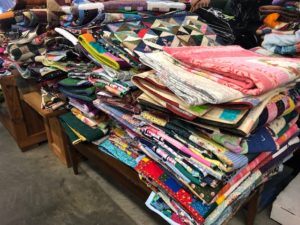 Williams said of Quilts of Compassion, “Their ministry is designed to help people in times of crisis and disaster and obviously since Hurricane Florence is still affecting peoples lives and they are still trying to recover and we’re just trying to provide compassion, show love and provide some warmth.”

He noted the work is continuing to try to assist families in recovering from the storm. It is estimated there are more than 200 families in Bladen County who are still not able to return to their homes due to the damages received in the storm.