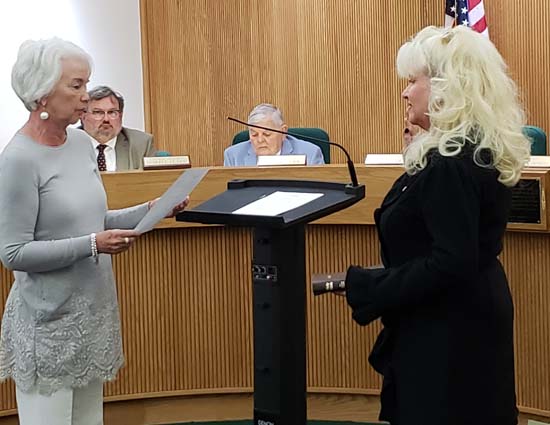 The newly re-elected members of the Elizabethtown Town Council were administered the oaths of office by Bladen County Clerk of Superior Court Nikki Dennis on Monday evening. Mayor Sylvia Campbell (pictured, above) and council members Howell Clark, Ricky Leinwand and Dicky Glenn thanked those who supported them during the election. Rufus Lloyd was also re-appointed as Mayor Pro Tem by the Council.

A short agenda of business items included approving the Certified Firefighters’ Roster; approval of Tax Releases and the monthly financial report. Council also approved the W.K. Dickson proposal for the City Cemetery Improvement. A resolution was approved to eliminate the traffic signal at Cypress and East Broad Streets. A two-way stop sign will be utilized at the intersection.

Cory Lyons, a local pastor in Elizabethtown, addressed the council regarding what the town is doing to improve the economy and bringing in jobs to Elizabethtown. The Mayor and several council members assured Mr. Lyons that they are constantly working to bring business and industry to the town.

Campbell stated the town just lost out on an industry due to the lack of natural gas. Also a job fair was recently held for another industry and only one person came to the event.

Lyons also remarked he had heard the board wanted to keep all the business on Broad Street and that Walmart and Lowes were not allowed to build on NC 87 Bypass.

Town Manager Eddie Madden said, “In the 12 years I have been in my position, we have never been approached by Walmart or Lowes to build on the bypass”. Campbell encouraged Lyons to meet with Madden and Clark to discuss the issue further.

In observance of Christmas and New Year’s holidays, town offices will be closed on December 24-26 and January 1.