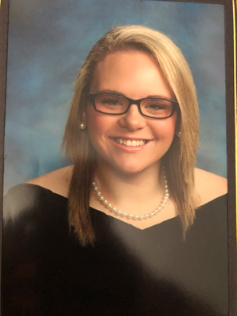 Boost the ‘Boro, Inc. announced today that Madison Cierra Byrd and Elizabeth Rae Allbright, both of Bladenboro, and graduates of West Bladen High School are the recipients of the first annual Boost the ‘Boro Scholarship.

According to President Don White, “The scholarship award has been a goal of the organization since it was formed over ten years but never got much traction until we made it a part of our planning and budgeting activities two years ago. Our members felt we were now in the position now to make the first two awards in 2018.”

Sunday Allen, a member of the Bladen County Educational system, serves as Committee Chair of Boost the ‘Boro Scholarship Award along with two additional educators and a member of the Bladenboro business community. “It is very important to our organization that the awards are determined based on the merits of the applicants and no bias is involved so only the Committee members of the organization are involved in the selection process. We were very impressed with the applications we received, said Allen and the decision was not an easy one to make. In the end, our Committee determined that Cierra and Elizabeth deserved to be our selections this year.”

Cierra Byrd, graduated from West Bladen High School with a cumulative GPA of 4.0 and will attending the University of North Carolina at Chapel Hill to pursue a major in Biology-Pre Med and plans to enter medical school with a focus aimed at Pediatric Cardiology. She is active at West Bladen and participated in several clubs and served as Vice President of the Student Government and Secretary of the Beta Club. She was a JV and Varsity Cheerleader and also graduated in May from Bladen Community College with two Associate Degrees. In her free time, Cierra is very involved in both her Community and her Church, having participated in the Savannah Mission Project and Coloring for a Cure with the UNC Children’s Hospital.

“My passion to study medicine came about from a personal knee injury I received as a Cheerleader during my sophomore year. Through the surgery, pain and physical therapy, I saw first-hand how important it is for physicians to be both caring and compassionate. My goal, at the end of my educational experience, is to bring specialized medical services back to the community that has meant so much to me,” said Cierra.

Cierra is the daughter of Jessica Byrd and the Granddaughter of Billy and Linda Parnell.

Elizabeth Allbright, graduated from West Bladen High School with a cumulative GPA of 4.5. She will be attending the University of North Carolina at Pembroke this Fall pursuing a major in Biology-Exercise Physiology and afterwards continue her educational efforts and pursue a career in Physical Therapy with a concentration in injury recovery. She is also very active at West Bladen and participated in several clubs, including the National Technical Honor Society, FFA, Dream Team, Beta Club and was elected as Treasurer of the Student Government her Senior year.

“Athletics and sports are my passion and I played volleyball, basketball and softball during my four years of High School. I want to help athletes and other with injuries be able to get back to the things they enjoy and are important to them. I have always wanted to help people in whatever career field I decided on and I know physical therapy is the right career path for me,” said Elizabeth.

Elizabeth is the daughter of Laura and Donald Allbright.

“We couldn’t be more proud of these two individuals, said White and are happy that we had an opportunity to perhaps play a small part in helping each of them pursue their life goals. We will be following them as they pursue these efforts. “

If you are interested in making a donation to Boost the Boro Scholarship Fund, any level or amount will be greatly appreciated and will go directly into our Scholarship account and used specifically for future awards. Please send your check to:

Attention: Joyce Walters, Treasurer, Scholarship Fund or you can call Don White at 770-490-704 if you need more information.