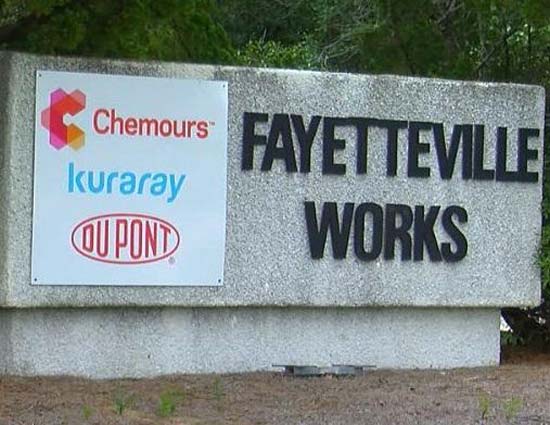 Chemours claims in a lawsuit that DuPont downplayed environmental liabilities at its Fayetteville Works plant in Bladen County, according to The Associated Press. DuPont has filed a motion to dismiss the lawsuit and wants the matter resolved through private arbitration.

The lawsuit was unsealed Friday after a judge in Delaware ruled that the continued secrecy violated court rules, according to the wire service report. Delaware’s Supreme Court rejected an appeal by DuPont last week. Chemours’ global headquarters is in Wilmington, Delaware, according to the company’s web site.

Chemours had failed to file a redacted version of the the lawsuit within the required three days after the lawsuit was filed in May. The Associated Press had noted the expiration of the deadline and asked the court to unseal the complaint.

According to the lawsuit, Chemours claims that DuPont had an option for investing $60 million to end chemical discharges into the Cape Fear River at the Bladen-Cumberland County line, but recommended spending $20 million to reduce discharges by 70%. Instead, according to The Associated Press, the lawsuit claims that DuPont spent $2.3 million that eliminated only one waste stream.

Chemours also claims that it faces environmental liabilities in New Jersey that far exceed the $337 million cited by DuPont at the time of the spinoff, according to the AP report.

In a consent order with the state of North Carolina, Chemours agreed last year to pay a $12 million penalty and $1 million for investigative costs, and to sharply reduce air emissions of a compound known as GenX, the AP reported. The company says the total cost of the consent order will exceed $200 million, which is 100 times DuPont’s estimated $2 million, according to the AP.

In addition, Chemours was required to report air emissions of GenX each month, measure and analyze the PFAS contamination at downstream public utilities’ raw water intakes, remove 99 percent of surface water contamination, and provide effective systems to treat drinking water fountains and sinks in public locations, according to the February order.

The consent order also called for Chemours to submit a written report demonstrating full compliance with all of the measures in the order by February 28, 2021. According to the consent order, Chemours must meet all of these requirements each year.

Several thousand people rely on the Cape Fear River for drinking water. GenX has been found in several wells near the Bladen County plant. GenX is a chemical compound that has been found to cause cancer in laboratory animals. It has not been determined how prolonged exposure to GenX affects humans.

Chemours is asking a judge to declare that it is not responsible for liabilities exceeding the maximums certified by DuPont, the AP reported. It also wants to be able to get DuPont to cover any historical DuPont liabilities that exceed the caps. Alternatively, it is asking that the $3.9 billion dividend it paid DuPont at the time of the spinoff be returned, the report stated.

DuPont completed its spinoff of Chemours in July 2015. Chemours sells performance chemicals, including titanium dioxide, fluroproducts, fluoropolymers, fluroelastomers and refrigerants, according to the company’s web site.