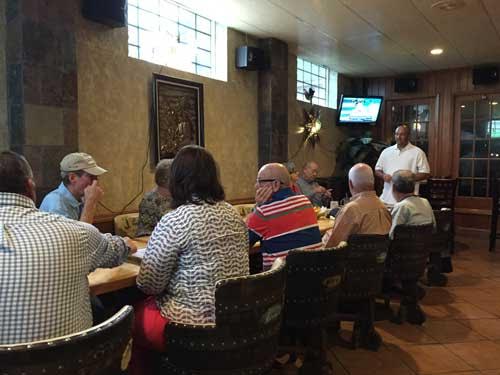 The Bladen County Republican Party held their regular monthly meeting on Monday night to discuss their upcoming Fall Fling. Chairman Landon Bordeaux called the meeting to order and welcomed all new comers to the party. Stuart Pait offered the prayer before the meal and Barbara Hines, the new Party Coordinator, reported on the successes of the GOP booth at the Dublin Peanut Festival.

At the Peanut Festival, several volunteers manned the Republican Party’s booth and offered several gifts to the public, including 400 copies of the Constitution, more than 100 copies of the book Ben Carson, Rx for America, by John Phillip Sousa IV. There were dozens of tee shirt sales and a few cash donations. “People are really engaged in the 2016 election cycle,” said Walter McDuffie, who spoke to Ben Carson, Scott Walker, and Ted Cruz and the recent Prayer Breakfast. The Bladen County Republican Party has not yet endorsed any candidate, and will wait until the national party has settled on a nominee to show their support.

An announcement was made that Sheriff Jim McVicker has been named as the Governor’s appointee to Bladen Community College’s Board of Trustees.

Conversation turned to the Fall Fling, which will be held on October 3, 2015, beginning at 4:00PM, at the Elizabethtown Farmer’s Market. Bill Rabon will be the keynote speaker and  Judge Fred Gore will act as the Master of Ceremonies for the event.

David Rouzer will attend the event, and some possible guest speakers will be Jim McVicker, Pauline Hankins, and Judge Warren.

Bladen Hardware will donate the prize for the raffle.