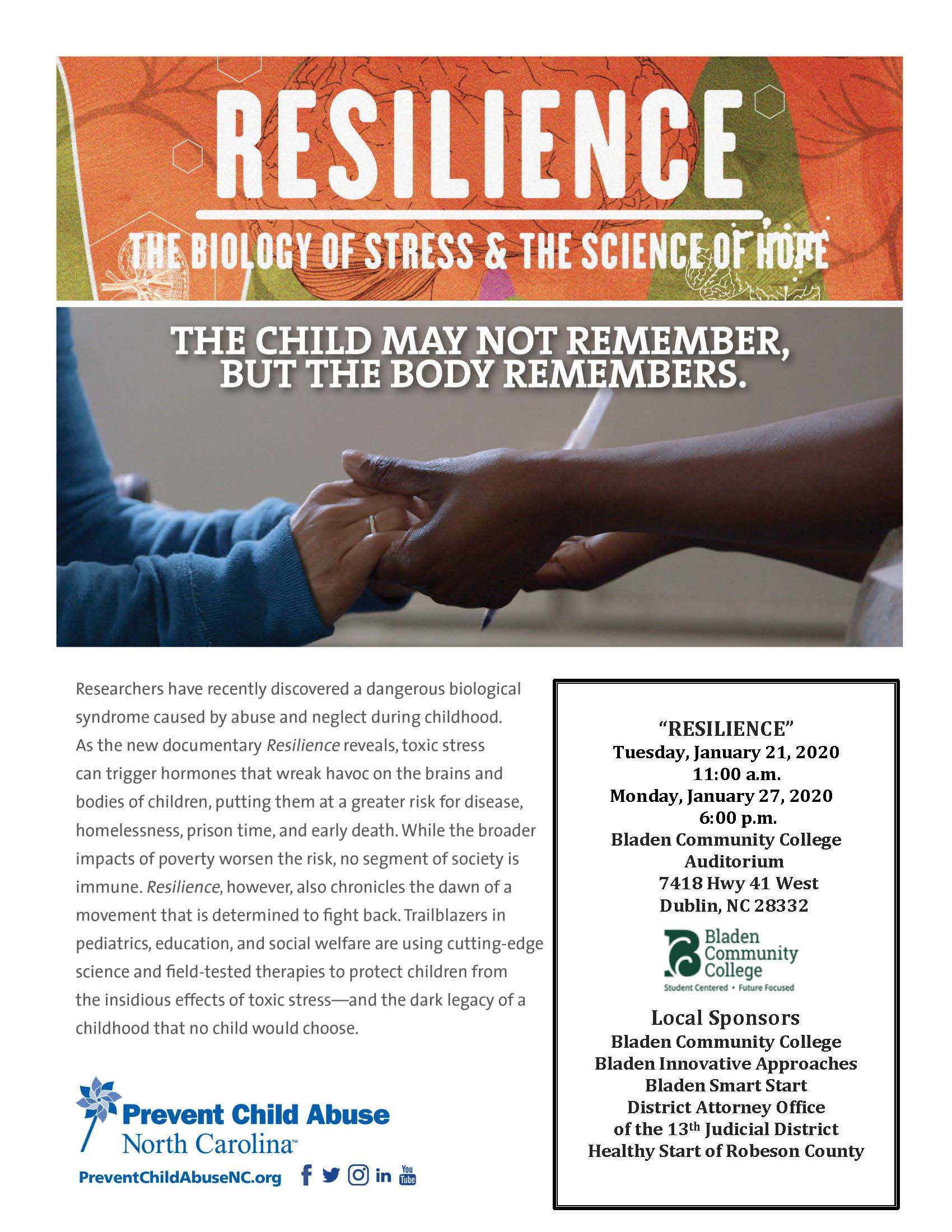 RESILIENCE – a special documentary viewing is scheduled in January

The traumatic events we suffer as children can lead to lasting physical and mental health challenges, two decades of research show. According to researchers, those negative health outcomes don’t have to be a child’s destiny. Recently, communities across North Carolina have been actively working to find ways to help reshape the paths for children in such situations. Bladen County has joined that effort and a special viewing of a documentary is scheduled in January in the county. Bladen Community College (BCC) is hosting the event along with other organizations that are interested in increasing awareness and providing support for children and their families.

“Resilience: The Biology of Stress &amp; the Science of Hope” will be shown on Tuesday, January 21 st at 11am and Monday, January 27 th at 6 p.m. in the auditorium on the campus of Bladen Community College. Local sponsors are: BCC, Bladen Innovative Approaches, Bladen Smart Start, District Attorney Office of the 13 th Judicial District and Healthy Start of Robeson County.

Prevent Child Abuse North Carolina teamed up with UNC-TV, the Child Trust Foundation, the Winer Family Foundation and others to host Resilience Week in November, a series of educational events and efforts featuring a statewide airing on UNC-TV’s public television station of an hour long documentary, “Resilience: The Biology of Stress &amp; the Science of Hope” , about adverse childhood experiences. The film draws information from the CDC-Kaiser Permanente Adverse Childhood Experiences (ACE) Study, ground-breaking research that follows some 17,000 participants through their lives and links the presence of childhood abuse, neglect, homelessness, life in violent neighborhoods and early exposure to
substance abuse to negative health outcomes later in life.

Prevent Child Abuse North Carolina held screenings of the Resilience documentary for more than 10,000 individuals in the state, largely those who work closely with families and children including one held at the Bladen County Cooperative Extension, sponsored by Jon David, District Attorney of the 13 th Judicial District.

Several local agency representatives in attendance then began plans to bring the documentary to even a larger audience and hopefully stimulate conversations about how to combat the effects of trauma as a community.

The January screenings at Bladen Community Colleges are a chance to reach those interested in learning more about the research, ACEs and the supports that communities have to aid children and their families in reducing negative outcomes.

“We hope the community will come together and think about ways they can be a stronger support for families no matter what the setting,” said Barry Priest, Vice- President of Student Services at Bladen Community College and Co-Chair of the Behavior Interventions Team at the college.