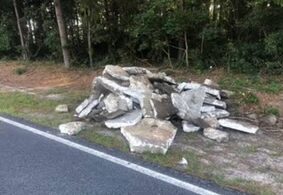 The Bladen County Sheriff’s Office reports a significant increase in illegal dumping of litter around the county in recent months. One property owner has had enough after someone dumped a load of broken concrete on Cabbage Road near Bladenboro.

Robert E. Hester is offering a $500 reward for the person’s identity responsible for dumping a broken concrete driveway on the side of Cabbage Road this week.

Hester explained that there had been multiple issues with people illegally dumping debris in the area over the past five years.

According to Hester, the North Carolina Department of Transportation had to clean out a clogged canal due to illegal litter on the road last year.

Under North Carolina’s anti-littering law, any person who violates the law by littering an amount exceeding 15 pounds up to 500 pounds and not for commercial purposes is guilty of a Class 3 misdemeanor. The punishment may lead to a fine of five hundred dollars ($500) up to two thousand dollars ($2,000). In addition, the court shall require the violator to perform 24 hours up to 100 hours of community service work.

Anyone with information regarding whom committed the illegal dumping of the concrete on Cabbage Road near Bladenboro may call Mr. Hester at 910-872-3285.

Anyone may report suspects in criminal litter cases to the Bladen County Sheriff’s Office at 910-862-6960.