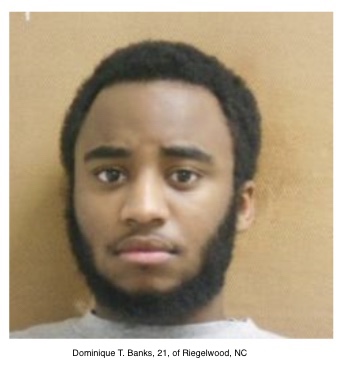 ELIZABETHTOWN, NC – Dominique T. Banks, 21, of Riegelwood, completed a guilty plea to one count of Statutory Rape and was sentenced on Monday in Bladen County Superior Court. As a result of the plea, Banks was sentenced to 166-260 months (13-21 years) in the North Carolina Department of Adult Correction.

The case arose from an incident in the summer of 2019 that was discovered when the victim reported that she had been sexually assaulted by Banks at his residence. At the time of the offense, Banks was 20-years-old, and the victim was 13-years-old.

The case was reviewed by the Bladen County Department of Social Services and the Bladen County Sheriff’s Office. The Sheriff’s Office filed the charges against Banks following an investigation. Banks, who also has a previous conviction in Wake County for Indecent Liberties with a Child, will be required to register as a sex offender at the completion of his prison sentence. Banks will also be subject to satellite-based monitoring for the remainder of his life.