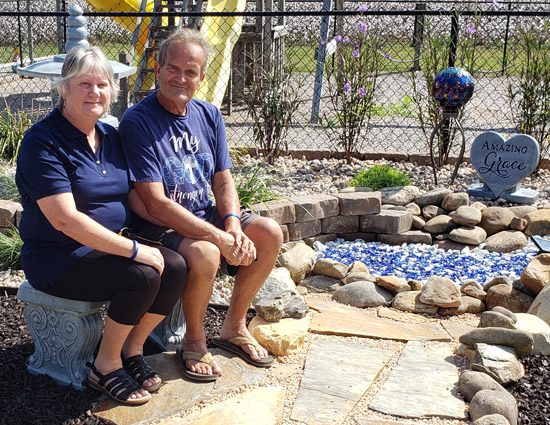 Randy West says he has experienced “a true God-given miracle” as he leans against a railing under the carport of his house located just outside of Clarkton on a warm September morning.

It’s the home he shares with his wife Sharon, daughter Jessica, a few chickens, some purple martins that fly in and out of nearby nests, a couple dozen goldfish, a cat and a newly created rock garden in the backyard named “Amazing Grace.”

It’s an appropriate name for the garden after what the 64-year-old retired parts, service and branch manager for an equipment company has been through the past two years. Twice he’s had brushes with death, yet still is very much alive and kicking.

“It’s amazing that I have the strength to do this,” West said. “Only by the grace of God, I could do it. That’s why we put the sign out and call it our ‘Amazing Grace’ garden.” 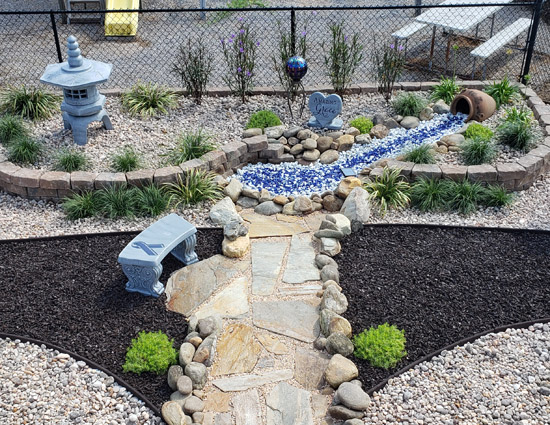 The rock garden has 12,000 pounds of river rock, almost a ton of brown rubber mulch made from old tires, a bench with a blue ribbon on it, and blue broken glass-styled rocks seemingly coming from a spill pot that give the appearance of a stream passing in from of the “Amazing Grace” rock sign that’s on display in the middle. There’s also a Japanese pagoda, Japanese lantern and a variety of plants. All of the blue in the garden carries a special significance.

The rock garden lies beside a man-made pond and in front of a fire pit that West built earlier.

“I wanted to prove to myself that I still could do things that I used to be able to do,” West said. 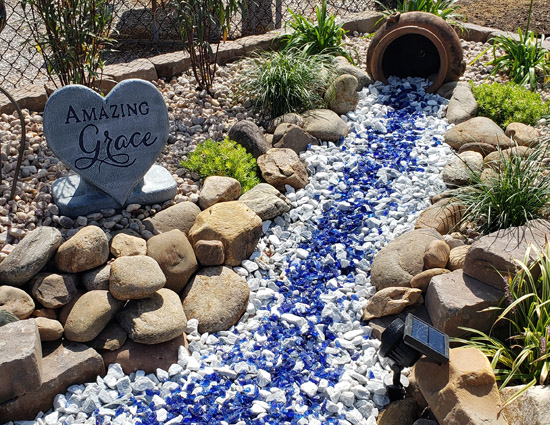 West had a lot to overcome to be able to spend four weeks in the summer’s heat, guzzling down bottles of water brought by Sharon during frequent rest breaks.

In 2020, West contracted COVID-19 and spent eight days in a hospital in Concord hooked up to a ventilator. He was told that on average that anyone on a ventilator more than six days at that time didn’t live. He was hospitalized for three weeks.

In January of this year, West was diagnosed with colon cancer. He felt, at best, he had a year to live. At least that’s what he was told. He was discouraged and disappointed.

“I didn’t want to plan for next week because I didn’t know if I was going to be here,” West said.

West found another doctor that offered treatment and, just as important, hope. Today, West is in remission, although chemotherapy treatments will continue to be needed. 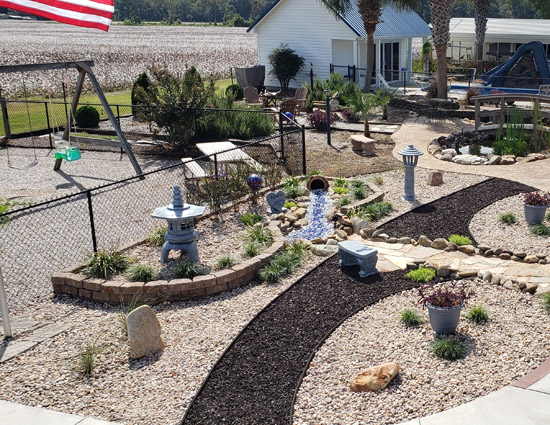 With hope from a new doctor and support from family and friends, West said he decided to fight the cancer instead of give in.

“I got tired of my wife and family telling me that I’m going to make it,” West said. “I said, ‘Well, I believe I’m going to go with it.’ That’s when I started doing things like this (rock garden) and planning for the future.”

Now, West’s future looks bright. “At one point I wasn’t expecting to see one more birthday.” he says, “Now, I’ve purchased a camper because we’re planning on going camping. I’ve got a little work to do on it.”

West also is back to singing in the choir at First Baptist Church of Clarkton. He had to miss several months because of cancer treatment.

“It was amazing,” West said of the first Sunday back singing with the choir. “I love to sing. I’ve had so many people say that it was a blessing to them for me to be up there. Not only do I love it, I think I blessed a lot of people by proving that God brought me back to church and brought me back to the choir.”

West often is seen wearing his blue “God Is Stronger Than Colon Cancer” T-shirt and he’s constantly wearing a blue wristband. Of course, there’s the blue ribbon on the rock garden bench and blue rock glass flowing in the garden. Blue signifies support for and awareness of colon cancer much like pink is used for breast cancer.

“There’s no doubt in my mind that the amount of people that prayed for me, that would come to my house, that would send me cards, I could just feel it,” West said. 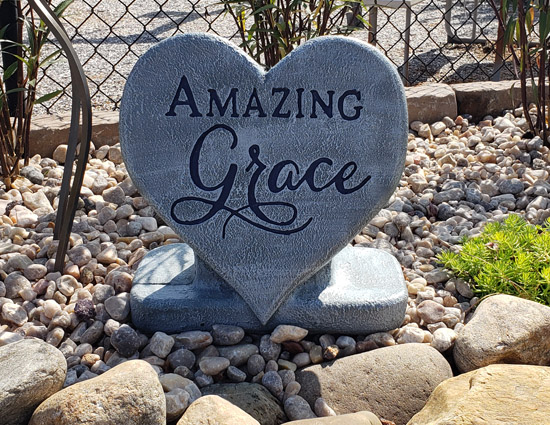 Now, for West, it’s on to the next project around the house or yard — maybe fixing that camper and head off on an adventure — or soon gathering the kids and grandkids around the fire pit and roasting marshmallows.

Randy West knows the grace he’s been shown battling his illnesses the past two years has been amazing. He now has a garden in his backyard to prove it.