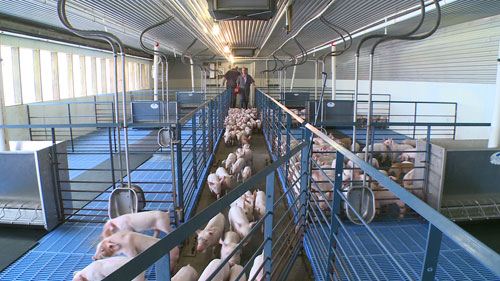 Dr. Turner educates the Rotary Club about the Pork business

ELIZABETHTOWN — The Elizabethtown Rotary Club was treated to a presentation by Dr. Mathew Turner, who serves as the staff veterinarian for Prestage Farms.

He earned his doctorate of veterinary medicine from N.C. State University in 2000. He was named the N.C. Young Veterinarian in 2004 and the 2014 Swine Practitioner of the Year by the American Association of Swine Veterinarians.

Turner told those in attendance that Prestage Farms is active in seven states with swine operations and also is involved in the turkey business.

“It is still family owned and operated,” said Turner. Prestage Farms is owned by Bill Prestage.

Turner then turned the conversation to pork and pork production. He told the group he was there with a presentation for the National Pork Council to help them better understand how pork is grown.

First, he showed the group a brief video which provided some food facts then began his conversation. Turner noted that the demands for food are projected to grow in the future.

He noted that by the year 2050, it is anticipated the need for food will exactly double. Turner told those in attendance that farming is evolving. He out pointed such modifications as GPS guided harvesters and improvements to planting techniques.

Turner noted that currently, through modern technology and advancements in techniques, farms are improving how they impact the environment. For example, Turner said that for milk production, farmers are using about 65 percent less water today than they did in 1944 and about 90 percent less land.

Turner said that in swine production today, farmers use about 41 percent less water and 70 percent less land than in the past.

“Today, pork is safer, leaner and more nutritious than ever,” said Turner.

He said that in the late 1970s, demand for pork and pork products fell while chicken increased. He attributed that to the fact that, in the 1970s, chicken was touted as being more nutritious.

Turner said that due to improvements over the years, pork has become leaner, more nutritious and has less fat.

“We have improved efficiency through animal health,” said Turner.

He talked about advancements in how pigs are raised on the farms. Instead of the free roaming, pasture fed pigs, many folks are familiar with from childhood, Turner said pigs are now raised in enclosed barns.

Turner explained that a pig’s life begins at the sow farm where the sow is artificially inseminated. The gestation period is 114 days. A litter of pigs will consist of 10 to 13 piglets. Turner said the piglets will be weaned at 21 days and moved to the nursery.

Turner said that Prestage Farms maintains high standards for the health for their animals.

“We do our best to keep disease out of the farm,” said Turner.

He explained that as the pigs leave one farm, the barns are cleaned and sanitized before the next group of pigs arrives. This, said Turner, is just one way to help keep the animals healthy.

Published in Business and News