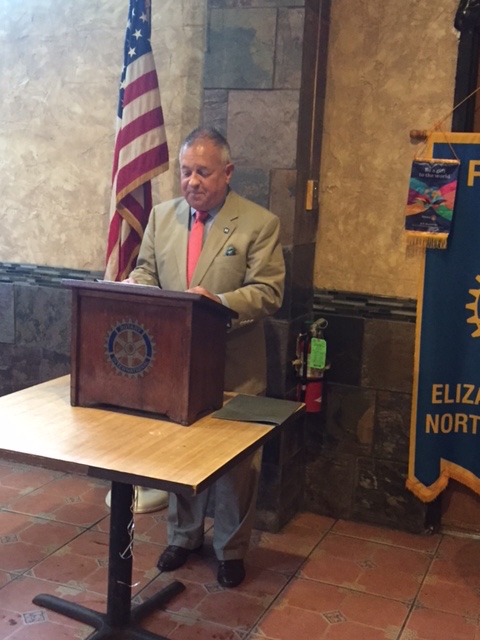 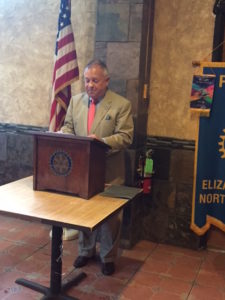 The Elizabethtown Rotary Club met on Wednesday and learned about Bladen Healthcare and the future of rural health care in North Carolina from Breeden Blackwell of Cape Fear Valley Health.

He told those gathered that Cape Fear Valley is committed to the residents and patients of Bladen County. Blackwell said the hospital offers surgery, obstetrics, a sleep lab, an emergency department, and urgent care services among other things.

Blackwell said that CFV has partnered with Campbell University to create a residency program.

“Campbell University and Cape Fear Valley have partnered to bring doctors to you,” said Blackwell.

He said that currently, funding for the program is in the proposed budget bills that have been approved by the NC House and NC Senate; however there are some differences between the two budget bills and the budget bills will go to a conference committee. Blackwell said the final version of the budget bill will be sent to Gov. Pat McCrory for his signature.

“We have been working on this program for five years,” said Blackwell.

He said if Gov. McCrory approves the budget bill, then the residents in Bladen County could see some new faces in the community. If approved, in the first year, Blackwell anticipates there will be about 150 residents (doctors) but they will distributed throughout North Carolina.

He said the primary goal of CFV is to provide health care to residents in rural southeastern North Carolina and Bladen County.

He explained that in the future, community care will involve multiple agencies such as Hospice, Home Health, and others coming together, with the common goal to be lowering or preventing hospital readmissions. Blackwell said when the patient goes home, they will have someone who will check on them and ensure they are following their recommended diet and they understand how to take their prescribed medications.

Blackwell said that everyone will have to step up and meet all of the goals set. He said agencies and hospitals will be held accountable for meeting the goals.

Blackwell also addressed the issue of a new hospitals for Bladen County. He said that the hospital must make enough profit to be able to pay for a new hospital.

“We believe it will happen, one day,” said Blackwell.

In other business, Rotarian Tiina Mundy updated the club on the Jim Cantor Swim. She said Cantor swam 2,500 yards on his 89th birthday. The club had collected a donation of $55.36 for Cantor’s swim challenge.