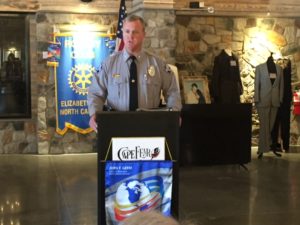 Elizabethtown Police Chief Tony Parrish visited with the Elizabethtown Rotary Club during their luncheon meeting at Cape Fear Vineyard and Winery on Wednesday.

“Coming to the police department was a great opportunity,” said Chief Parrish.

He said as he was preparing to retire from the Highway Patrol he learned about the Police Chief vacancy with Elizabethtown and decided to apply for it. Chief Parrish began his duties on April 1.

Chief Parrish said very few changes have been made since his arrival. He said in talking with the officers, he learned they were not happy with the white uniforms. Chief Parrish said he listened to their comments and then offered them a couple of options.

He told the group that he is encouraging his officers to be out in the community. Chief Parrish said the department is performing more license checks.

Chief Parrish said he has also instituted a new policy manual as well as a new performance appraisal system.

He said he has also implemented a promotion process. Chief Parrish said that in the past there was no clear promotion process for the officers. So, in April he began to work on creating a new promotional process. He said the new process consists of a written test that measures an officer’s understanding of criminal law, traffic law and town policy. Chief Parrish said there is also an assessment that awards points for such things as years of service. He said all of the points are totaled and a promotional list is generated and posted where everyone can see how well they performed.

Chief Parrish said he also encourages officers to enroll in classes at the NC Justice Academy in Salemburg and Robeson Community College in Lumberton.

Chief Parrish said that for the citizens, when they leave to go on vacation, the police department offers a form on the department’s website or they can come to the office and complete it. The officers who are on patrol will periodically check on the residence to ensure it is secure.

Chief Parrish also said that the police department is partnering with the Bladen County Sheriff’s Office to offer “Are You Ok?” This program is designed whereby at a designated time of day, the system will call a resident up to three times. If the resident does not answer their phone, a member of law enforcement, fire, or EMS will be dispatched to the residence to check on the person. To enroll in the Are You Ok program, contact Sheryl Young at the Bladen County Sheriff’s Office at 910-862-6960.

Chief Parrish also said the department is monitoring school zones in the mornings and afternoons.

Chief Parrish was asked about his stance on body cameras. He told the group that the advent fo the use of body cameras is similar to when dash cameras were first instituted. He said no one liked them at first.

Chief Parrish said that his opinion of the body cameras is the same as the dash board camera and that is it can only help the officer and the department.

Chief Parrish said that the use of such items really depends on where you are located and the situations your agency potentially could face.