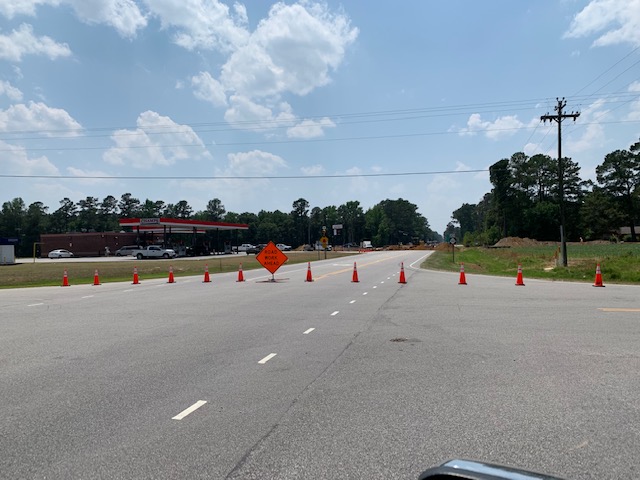 The NCDOT announced the nearly $1.76 million contract for the roundabout in April of this year. Construction was announced to begin in June according to NCDOT, but with June only a couple of days away the road has been blocked off.

The N.C. Department of Transportation made the intersection into an all-way stop in the spring of 2017, after a traffic analysis showed a high number of drivers on N.C. 410 were pulling into the path of those on N.C. 41, which did not have to stop. According to that analysis, almost 60 percent of the 31 crashes in the study involved angled collisions.

Although the all-way stop has reduced crashes, the department is building a roundabout to further improve the location’s safety and traffic flow, as well as to plan for anticipated growth in the number of vehicles traveling through the area.

“Roundabouts keep traffic moving through an area in a safe manner,” said Ken Clark when the contract was first announced, the department’s district engineer in the Whiteville office. “And they are easy to learn how to use.” 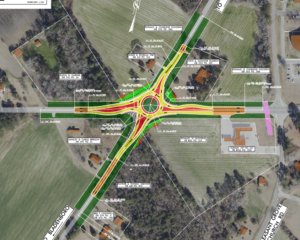 NCDOT awarded a contract this month to BMCO Construction of Lumberton. The roundabout is scheduled to be completed in the summer of 2020. Initially, the intersection will remain open during grading and drainage work. But for most of the duration, the project will require the intersection to be closed for the safety of the workers. A detour will send drivers on N.C. 41 onto N.C. 131 and Center Road, while those on N.C. 410 will be directed to take Pleasant Garden Road.

Home owners in the area have stated construction workers have marked places in their yards due to the upcoming roundabout construction.

Rusty Marsh, Division of Construction Engineer with NC DOT in Fayetteville confirmed the construction is due to the upcoming roundabout, but is not the contracted company that will be doing the roundabout construction. Marsh explained the work currently happening in the area is a natural gas company moving gas lines in order for the roundabout to be put in place.

Bladen County Crossroads to Get Roundabout