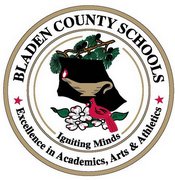 Rozier, Carroll remain chair, vice-chair of Bladen Board of Education

The Bladen County Board of Education met Monday for its first session of 2018 where they nominated Vinston Rozier to remain chairman and Roger Carroll as vice chairman. Also, the board was presented gifts from various schools to show appreciation in recognition of School Board Appreciation Month.

The Clarkton School of Discovery girls’ soccer team was recognized for finishing the 2017 season undefeated and for becoming the Bladen Five Conference champion. Additionally, the team allowed only three goals for the season.

Rev. Jason Williams and Barry Galyean spoke on behalf of the Release Time Program to inform the Board about how it works and the legality of the program. The program provides Bible-based education during the school day that reinforces biblical values and encourages confidence and self-esteem. Williams explained that, due to the law, the program was held off campus, had to be voluntary with parent approval, and could use no government funds. Because of legal reasons, the program cannot expand their work within the high schools unless it is a separate elective class. The program does background checks on its volunteers and is working to obtain handicap buses in the future.

Finance Director Sharon Penny gave a report for information purposes, Personnel Director Antonia Beatty gave a brief update on how teacher contracts would be handled in the future in response to new legislation. Maintenance Director Lou Nelon gave an update on ongoing roof projects that should be completed by next month and explained that the recent inclement weather has set them back.

Assistant Superintendent Tanya Head gave the board an update on the College and Career Ready Graduate (CCRG) program. Due to legislation, eventually all high school juniors that do not qualify for community college level English, reading, and math will be required to take a remedial class their senior year at the community college. Bladen Community College is requesting the legislature to delay the mandatory enrollment as only Occupational Course of Study students are exempt. Students will be chosen to enroll due to a mixture of their GPAs, standardized test scores, and other factors.

Adam Scepurek of Anderson, Smith, and Wike presented the board’s yearly audit, which checks the compliance with several laws and also checks the system’s overall finances. The audit was good without any noncompliance issues, though Scepurek did advise the board to use less of their fund balance than budgeted if possible due to there not being a lot left over to carry into next year.

Dr. Robert Heavenridge, Title 9 Coordinator, spoke with the board regarding the student reassignment policy. Due to new legislation, Heavenridge explained that they needed to be more strict about requiring students to attend the schools in their district.

Heavenridge and the board also discussed ways to address increasing problems with bed bugs in the county but agreed there was little they can currently do to address the issue due to legislation.

The board then proceeded to go into closed session to discuss personnel, student transfers, and legal issues.

Upon reconvening into open session, the board approved Personnel Action Addendum Items as recommended by Beatty.

The board was told that the makeup days for recent inclement weather school cancellations and delays had used the rest of the calendar’s built-in makeup days.

Lastly, a cyber safety class is being offered Jan. 9 at 6 p.m. The meeting also will be aired on Facebook Live.