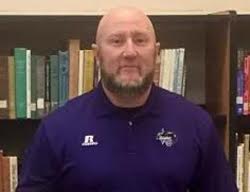 Bladen County native Russell Dove, currently the head football coach at South Columbus, has been selected as an assistant coach for the East team in the 2020 NC Coaches Association East-West football game.

The game will be played in July in Greensboro during the week of the NC Coaches Association meetings.

“I am excited,” said Dove. “It’s a pretty big honor, and I am blessed to get the opportunity. Thanks to my staff and players because without them I wouldn’t be getting it.”

A 1989 graduate of Bladenboro High and a 1994 graduate of UNC Pembroke, Dove began his coaching career as an assistant at West Columbus where he served for six years.

Dove then worked four years as an assistant at West Bladen before being named the Knights’ head coach in 2013. He guided West Bladen to the playoffs in 2014 and 2015 before taking the South Columbus job in 2016.

In his three years at Vinegar Hill, Dove’s Stallions have compiled a 36-7 overall record and are 24-1 in Three Rivers Conference play, winning two outright conference championships and sharing the 2017 crown. South Columbus is 6-3 in state playoff games under Dove.