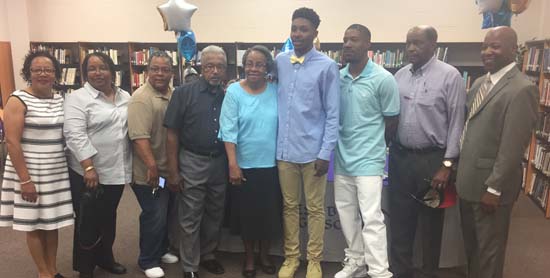 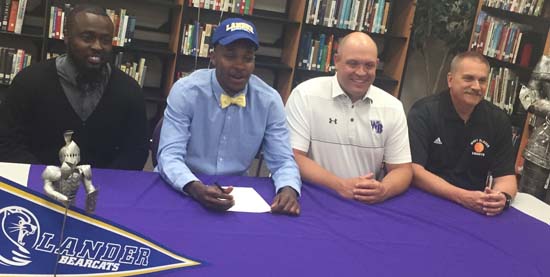 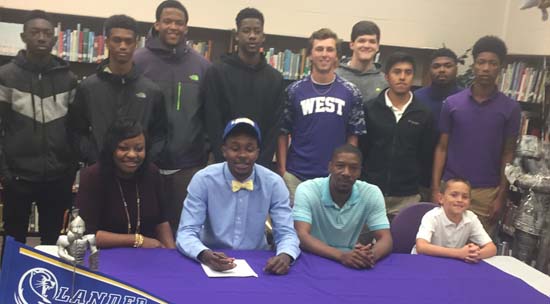 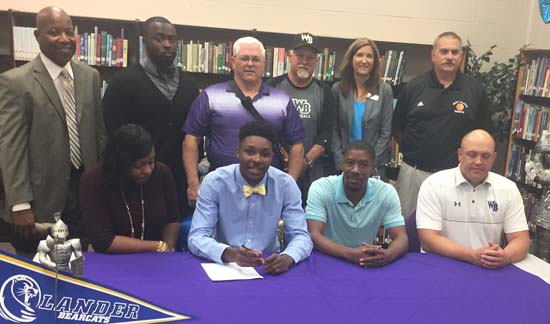 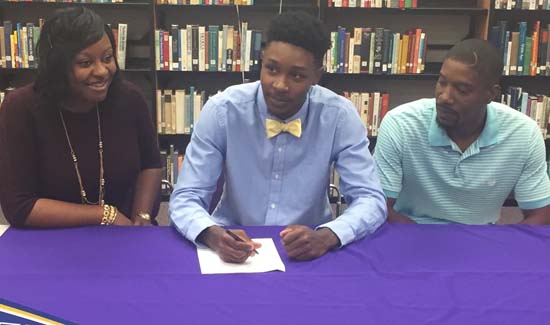 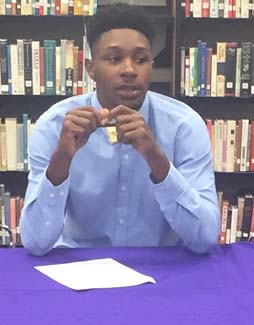 DUBLIN – With his family, teammates and coaches in attendance, West Bladen senior star Sayaun Dent made his commitment to play basketball next season at Lander University in Greenwood, SC.

Dent had contact with Campbell and UNC-Wilmington early in the recruiting process, but eventually Newberry, UNC-Pembroke, Fayetteville State, Elizabeth City and Mt. Olive would come calling.

But in the end Lander was his choice. “I really liked the campus and the basketball coach (Steve Roberts),” said Dent. “It has a good chemistry program and that is what I plan to major in. I just felt like it was the right fit.”

It also didn’t hurt that Dent’s former West Bladen teammate Rahu Purdie is currently playing at Lander. “It is going to be good playing with somebody I know,” added Dent.

Sayaun’s mom Crystal said, “I am happy and I feel it will be really good for him. We really liked the classroom size and the campus. It is small but not too small.“

Dent was a 3-year starter at West Bladen and the Knights won 60 games in those 3 years. As a senior Dent averaged 17 points and 8 rebounds per game and was named All-Four County Conference for the second consecutive year.

“Even more impressive is that he was a 2-time Most Valuable Player in our Christmas Tournament that has had a really strong field,” said Knight Coach Travis Pait.  “He is a 3-level player – he can score at the rim, from mid-range and from behind the 3-point line.”

Dent, a 6-3 180-pounder who played primarily on the wing at West Bladen, will be used at guard at Lander. “Anything we asked him to do, he wanted to do well,” continued Pait. “He is the best rebounder from a wing position that I have ever coached – in high school or college. He also has the best pull-up jumper in the area.”

Pait also praised Dent’s character, “He comes from a great family and is a hard worker. Sayaun never had a write-up at school and never was in trouble in the classroom. I am excited for what he is going to do at Lander and later on with his life.”

The Lander Bearcats finished 12-18 last season and 7-11 in the Peach Belt Conference.