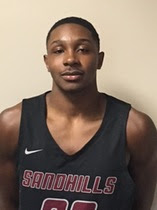 West Bladen grad Sayaun Dent is leading the No. 1 ranked Sandhills Community College Flyers in both scoring (18.7 points per game) and rebounding (8.4 rebounds per game.)

The Flyers have compiled a perfect 13-0 record and sit atop the National Junior College Athletic Association Division III poll.

In the Flyers’ final game before the Christmas break, Dent connected on 6 of 9 shots from the field and just missed a double-double with 16 points and 9 rebounds in a 101-63 victory over Shooting 4 Greatness Academy from Raleigh.

On Saturday Dec. 14th, Dent sank 9 of 9 foul shots and finished with 15 points, 5 rebounds, 2 assists and 2 steals in a 116-83 victory over Dabney S. Lancaster Community College from Virginia.

The Elizabethtown native has connected on almost 92 percent of his free throw attempts and 50.6 per cent of his field goal attempts.

The Flyers return to action on Jan. 2nd when they host Hines Prep of Charlotte.