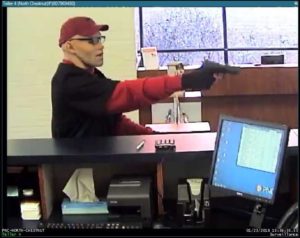 A second suspect has been arrested in connection with the robbery of the PNC Bank in Lumberton.

Rashad Young, 27, of Whiteville was arrested Thursday and is being held in the Robeson County Jail.

According to jail records he is charged with:
* Robbery with a dangerous weapon
* Five counts of assault with a deadly weapon on law enforcement
* Two counts of second degree kidnapping
* Possession of a firearm by a convicted felon
* Conspiracy to commit robbery.

He is being held under a $1 million bond, according to jail records.

Also arrested on Thursday was Jeramie Ross Vaughn, 29, also of Whiteville. He is being held in the Robeson County Jail also on a $1 million bond. He is facing the same charges as Young.

According to the FBI, four armed suspects walked into the PNC Bank in Lumberton at 3:30 pm on Tuesday afternoon and walked out with an undisclosed amount of money. The robbers were spotted in a grey Saturn and led law enforcement on a chase across two counties.

According to the FBI, the suspects exited the vehicle at various points during the chase. Shots were fired at law enforcement officers and they returned fire; however it is not known if any of the suspects were struck.

A manhunt ensued in Columbus County after the vehicle crashed on Silver Spoon Road and two suspects fled into the woods. Federal, state and local law enforcement agencies searched for the suspects until Wednesday afternoon. The search was ended at about 2 pm Wednesday and residents were advised to remain vigilant.