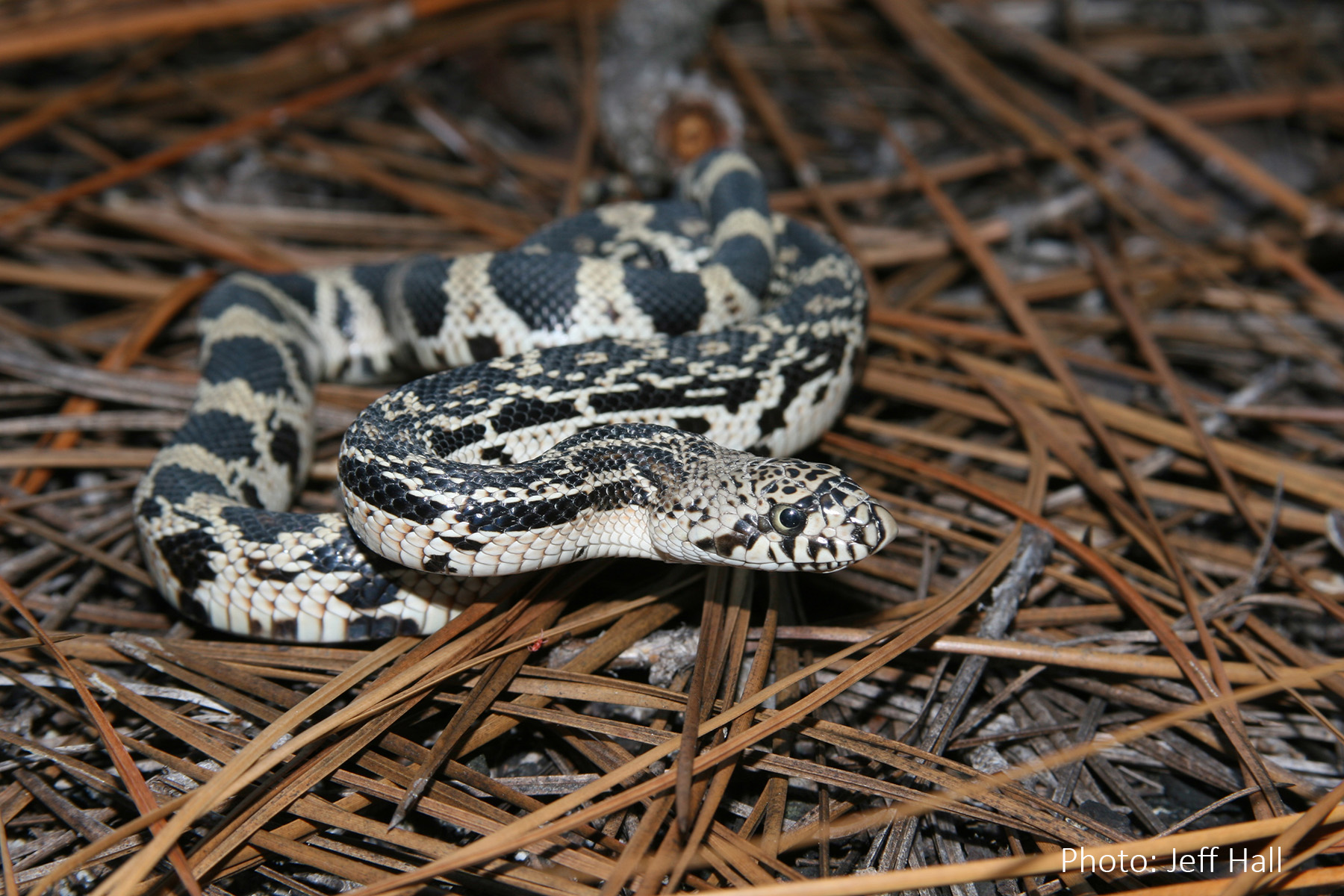 See a Pine Snake? The Wildlife Commission Wants to Know

Agency biologists are asking the public to help them learn more about the distribution of the northern pine snake in the Tar Heel state by reporting any sightings of these large but elusive snakes in the wild — not an easy task given the reptile’s propensity to spend most of its time underground.

When above ground, the northern pine snake is fairly easy to recognize. It is a large, heavy-bodied snake, typically reaching between 4 to 5 feet, but can be as large as 7 ½ feet. It has a white, tan, or yellowish background color with dark brown or black markings that begin as heavy mottling on the head before gradually becoming distinct blotches toward the tail.

In North Carolina, pine snakes are found mostly in the Sandhills, the southern Coastal Plain and in the southwestern mountain counties. They prefer open areas within pine-oak forests with well-drained and sandy soils.

“The best chance of spotting one is during the day, in these open areas, as they move from burrow to burrow,” said Sam McCoy, a wildlife technician with the agency. “Although the best time of the year to see one is in the spring and early summer, September and October are also good times since pine snakes are beginning to move to locations where they will spend the winter.”

People who see a pine snake in the wild are asked to send an email to pinesnake@ncwildlife.org with the following information:

McCoy cautions people to look but not touch any pine snakes they come across in the wild. While the pine snake is neither dangerous nor venomous, it is protected in North Carolina.

“Despite the fact that pine snakes are seldom seen, the species appears to be declining throughout much of its range,” McCoy said. “Because of this, the pine snake in North Carolina is state-listed as threatened and cannot be collected or taken from the wild without a permit.”

To get a better understanding of pine snake populations in Cherokee and Swain counties, the Commission is working with the Eastern Band of Cherokee Indians to conduct surveys in areas where pine snakes have either been seen or in areas with potentially suitable habitat. The Commission has constructed camera traps, which can document snakes passing through the area.

In the Sandhills and Coastal Plain, Commission staff and staff from the N.C. State Museum of Natural Sciences, have been monitoring pine snake populations by walking areas and searching for snakes, driving roads where snakes have been seen in the past and marking captured animals for potential population estimation. Museum and Commission staff have also tracked numerous individual snakes using radio-telemetry over the last 10 years. The data they have collected over the years have helped them understand how to better manage the species and determine the best conservation actions to benefit pine snakes in the long term.

“It’s difficult to conserve a species like the pine snake when we don’t even know all the places it occurs,” McCoy said. “Citizens can really help us out by providing records of pine snakes they see. The Wildlife Commission needs your help to conserve this rare and elusive species.”