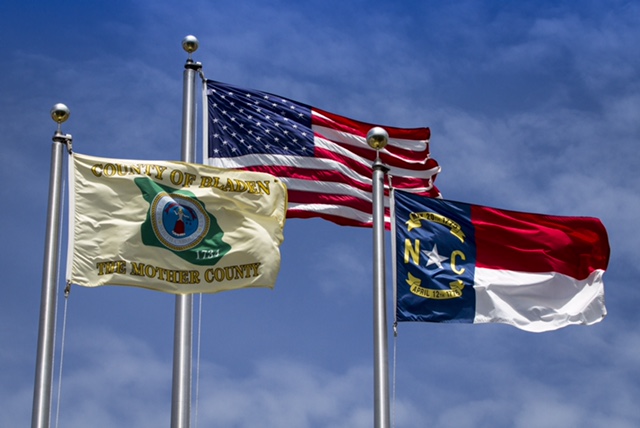 “It is time for our elected and appointed government officials to realize it is not a right to serve our country, it is a privilege! The majority elects people to serve. The key word is serve! The objective should be to serve by example.”

The holidays are behind us and we find ourselves facing a possible war in the Middle East. Before the next news announcement scrolls across the screen, please take a stand.

How often have you read, how our country stands as one nation, under God, indivisible with liberty and justice for all. Those are not just words, they are at the very core of what our nation stands for. Don’t you think we in Bladen County deserve leaders willing to stand and pledge their allegiance to the country they are serving. Our American Veterans also deserve the utmost respect from our government leaders.

The stars and the stripes and the men and women who have courageously fought under the great banner deserve respect. It is time we the people start demanding those who serve in political offices and appointed government seats respect the “Republic” and the flag for which it stands.

When leaders start questioning why our flag is needed and where the majority comes in, it is time to find new leaders. We should start by holding local leaders accountable.

There was a Bladen County Board of Elections meeting on August 13, 2019. I attended the meeting and witnessed with my own eyes and ears two members of the board show disrespect for our nation’s flag and for an American Veteran.

At first, I hesitated to write anything at all out of respect for Chairperson Louella P. Thompson. However, as I thought of the men and women who serve our country with their lives, saluting and pledging their loyalty I decided I could not keep quiet.

I wrote an article explaining my disdain for the actions made by two members, Ms. Louella P. Thompson and Mrs. Patsy Sheppard during the meeting. The reason Ms. Thompson and Mrs. Sheppard were the only two mentioned in the article was the fact they were the two perceived as being disrespectful in reference to the country’s flag and disrespectful to an American Veteran.

Mr. G.C. Bryan, an American Veteran in the audience asked the board members why the Pledge of Allegiance was not cited before the meetings. Ms. Thompson and Sheppard mumbled to each other about the reason for a flag and then Sheppard mocked the Veteran who asked about the flag. The actions of the two members needed to be exposed.

One board member did respectfully address Mr. Bryan. “Well we need a flag. We don’t have a flag,” Mr. Michael Aycock stated.

Some members of the audience said if the board members asked for a flag the Bladen County Commissioners could get them one.

After the two board members finished their whispers about not having enough room for the flag, and no need for the flag to be at the meeting, Ms. Thompson replied to the question, “That’s not a high priority.”

“Yeah, if that was our desire, we probably would have already done it without any suggestions from the “Showman”!” Sheppard stated with a twist in her neck referencing Mr. Bryan.

The article revealing the member’s actions was published calling out the two members for their actions and statements and demanding respect be shown for our flag and our service members. Mrs. Sheppard hurled public insults and liable remarks. She also made comments alluding to the fact anyone wanting to recite the Pledge of Allegiance was a white supremacist.

On November 14, 2019, at another Bladen County Board of Election’s meeting, Ms. Thompson took a different approach to the issue. She said, “In the last two and half years the Pledge of Allegiance has never been said. It’s never been put on the agenda…”

She added, “I researched the law book and saw nowhere in the law book where it says it had to be spoken at the board of elections meetings. So, I am following suit as the way it’s been being done…”

Ms. Thompson asked if anyone else had something they would like to add to the discussion.

Mrs. Sheppard again made it clear she thinks the pledge is for white supremacy, but she stated she didn’t have a problem with anyone else wanting to say the pledge.

Photos demonstrating respect shown to the American flag to serve as education.

Ms. Thompson and Ms. Sheppard and their supporters in the audience went on to discuss opinions about why their patriotism was being questioned never looking back at the video of their meeting to see their clear disrespect for the flag and the Veteran.

In the video of the meetings pure bureaucrats are seen exclaiming untruths such as the people are upset because we are making changes and in the next clip hear them say it has been like that for years, we are not going to change it now.

Ms. Wanda Monroe was in attendance during one of the discussions about the flag and asked if the board was responsible for the layout of the agenda. Ms. Thompson responded curtly, “If I need to make changes.”

“If we are going to unite the board and the majority of the people want us to recite the pledge to the flag, I am for it,” Board of Elections member Mr. Emory White stated.

“I’m not changing it!” Ms. Thompson exclaimed with a higher tone in her voice, “Where does the majority of people come in? They don’t run anything; they don’t rule anything.”

Yes, she really asked, “Where does the majority of people come in?” and then she really said, “They don’t run anything, they don’t rule anything.”

It is time for our elected and appointed government officials to realize it is not a right to serve our country, it is a privilege! The majority elects people to serve. The key word is serve! The objective should be to serve by example.

Our military stands and salutes the flag and so should our elected and appointed government officials. If they are not willing to stand for the flag and cite the Pledge of Allegiance they should be stripped of the privilege to serve our great nation.

The latest request for the Pledge of Allegiance to be spoken at the local board meeting was by Mr. Bryan on November 15, 2019. Ms. Thompson’s response was short. “Duly noted sir, thank you,” she said.

Since the August 13th meeting I decided to boycott the meetings just as Ms. Sheppard suggested I do, but not because they don’t recite the pledge at the beginning of the meetings, but because Ms. Thompson and Mrs. Sheppard have been disrespectful to the flag and an American Veteran.

We need to stop tolerating divisive behavior from our elected and appointed government officials. We stand for the flag and pledge allegiance to honor those men and women of all colors, races, and religions who have paid the ultimate sacrifice for our freedom under that banner. We stand and salute the flag as a testament that no matter our differences, no matter who is in office, we stand united in the land of the free and the home of the brave.

I have personally donated a beautiful American Flag with a pole and a stand to the Bladen County Board of Elections conference meeting room. In this public forum, I charge the Bladen County Board of Elections members to stand, salute and Pledge Allegiance to the Flag of the United States of America before they start to serve our county. It is not about republican or democrat, it is not about race, it is about respect.

If you would like to join together and stand for the flag and our service men and women, please sign the Change.org petition. By signing the petition you agree anyone in an elected or appointed government office should stand for the flag and pledge their allegiance to the United States of America. The petition will be sent to North Carolina Governor Roy Cooper, who appointed the Bladen County Board of Elections members. In addition, the petition will be sent to other elected officials.

Previous article, video of the meetings and other links:

Tags: It Is a Privilege Serving Our Country Is Not a Right