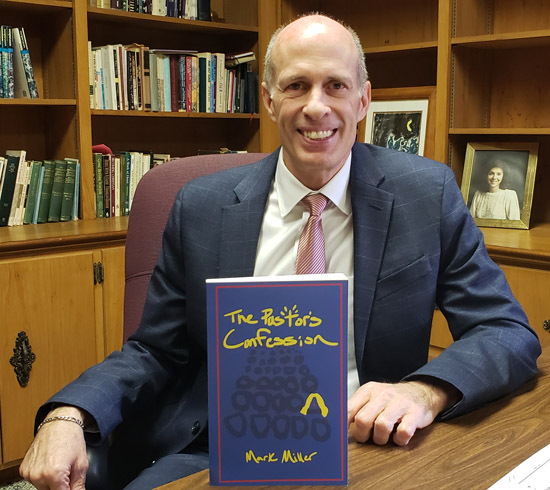 Mark Miller has had an active imagination since childhood, a long-standing love for writing and reading, and a faith-based upbringing that guided him to answer God’s calling to become a pastor.

The 57-year-old Kentucky native and pastor at First Baptist Church of Clarkton since 2011 has combined those traits in a novel way. He has set out on a venture to write spiritual-themed suspense novels about each of the seven deadly sins — greed, lust, envy, pride, anger, gluttony and sloth.

The second book in The Pastor and the Seven Deadly Sins series, titled The Pastor’s Confession, was released in September. It’s available on Amazon in paperback and Kindle eBook by clicking here. Miller is scheduled to be at the Clarkton Public Library at 10413 N. College St. on Sunday, Dec. 11 from 3-4 p.m. to sign copies of his latest book. The book will be available for purchase.

“I’ve been a pastor for almost 30 years and I think I can tell a good story, a good suspenseful story,” Miller said. “This series gives you a slice of life from that of a pastor and his perspective and how what goes on with him and his family.”

In The Pastor’s Confession, Jim is satisfied as the pastor of a large church, married to a wonderful woman, and has two adorable young daughters.

“The pastor has got a great life, but eventually finds that he’s attracted to one of the church members through a series of inappropriate meetings,” Miller said. “He comes closer and closer to falling to temptation and all kinds of devastating consequences for that. Ignored by (the pastor) is someone trying to help him. That’s all intertwined in the story.”

The book illustrates the temptation of an extramarital affair and the grace of God that is present in confession.

“I hope that by reading it, you see how attractively awful infidelity is in your life,” Miller said. “At the same time, I want readers to see something about God’s providence. That’s part of the story as well and I hope the infidelity and the temptation that the pastor is going through does not overshadow God’s care that takes place in the story. I hope that also speaks to people about God’s grace.”

The first book in the series, The Pure in Heart, was published in 2018 and dealt with greed. It was about a pastor and a vagabond testing each other in a spiritual warfare. It’s available on Amazon by clicking here.