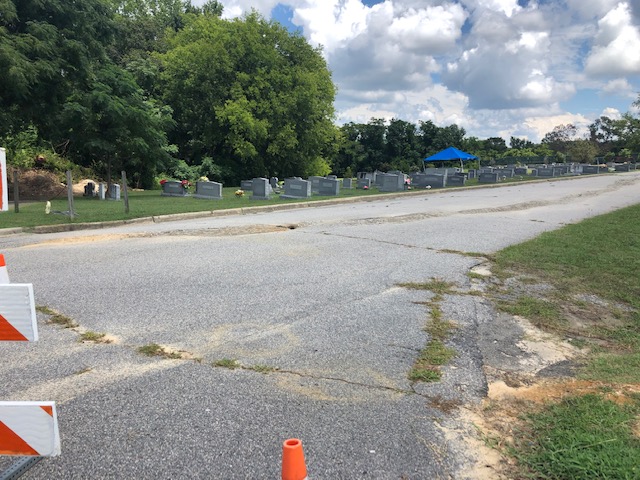 The Town of Elizabethtown Council members discussed plans for repairs to the Town Cemetery on Queen Street in Elizabethtown.

Scott Sigmon, an engineer with W. K. Dickson and Associates, gave a presentation to the council regarding the geologic damage to the City Cemetery back in January this year. Elizabethtown received roughly 15 inches of rain during Hurricane Matthew that caused a small sinkhole to form in the roadway at the cemetery.  The sinkhole was repaired and the road was repaved. During Hurricane Florence, Elizabethtown received 30 inches of rain and the sinkhole reopened. 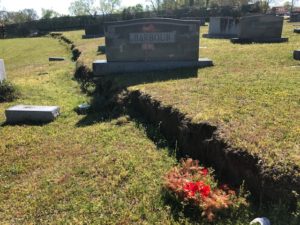 The damage to the cemetery was more significant with as much as a two foot drop in some locations in the cemetery, according to Sigmon.

The town officials have continued to work with engineers, state and federal agency to resolve the cemetery issues. There have been several ideas discussed over the months during the Town Council meetings.

On Monday, Town of Elizabethtown Manager, Eddie Madden announced, “FEMA wants to return things to pre-storm conditions so the town has turned the cemetery project to a large project which eliminates the time crunch for funding.”

Mayor Sylvia Campbell expressed delight hearing the news. “I am thankful and I know the family with loved ones out there will be thankful too.”

Returning the cemetery to pre-storm conditions will eliminate the need to move any burial sites.

Assistant Town Manager, Pat DeVane explained there will be sheet pile wall constructed to return the cemetery to the condition it was in prior to Hurricane Florence.

Engineers have been reviewing the site for the wall construction last week and this past weekend for the proposal.

“This technique has been used across the country and should work here,” Madden said about the sheet pile wall. It could take two years or more according to reports.

“The proposal will be submitted for review and may be in the portal for 60 to 90 days for FEMA to review,” DeVane explained, “But, ultimately we feel like the project will be funded.”

“It’s the only project FEMA will fund,” Madden said.

Council member, Dickie Glenn asked about the cracks widening in the road at the cemetery site. The cracks in the road have been filled with loose gravel collected from another construction site, according to DeVane.

During the noon work session of the Elizabethtown Town Council in July, Sara Burroughs from Sage Design presented a site plan for a proposed new cemetery site that the town is considering.

FEMA will not fund the alternate location, but the State of North Carolina will according to Madden and Campbell.

“We still have to make up our minds if we want to be in the cemetery business, which I think we will,” DeVane said about the new cemetery site.

The repairs at the cemetery on Queen Street will not allow much room for any new plots for burials, according to DeVane.

The council agreed to continue to work on the solutions for the cemetery on Queen Street and work towards the possibility of the new Cemetery location as well since there may be State funds available for the new location.

3 options for Cemetery damages in Elizabethtown