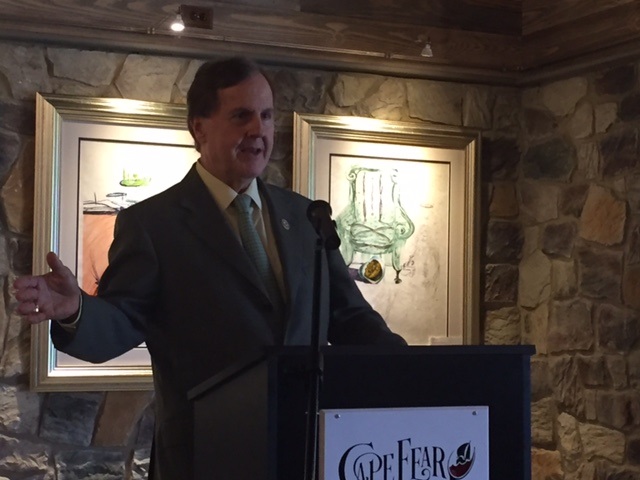 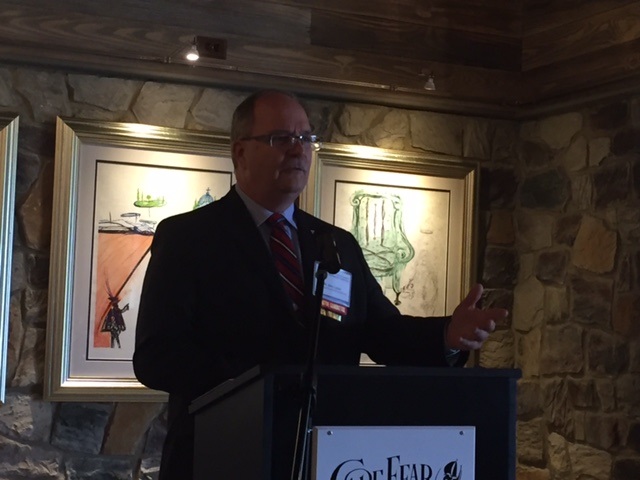 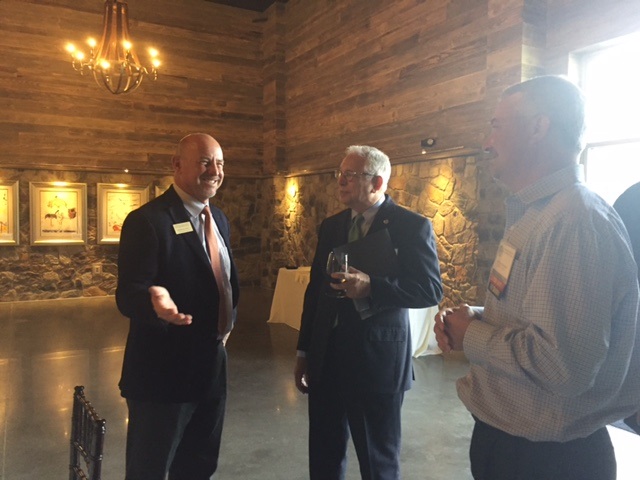 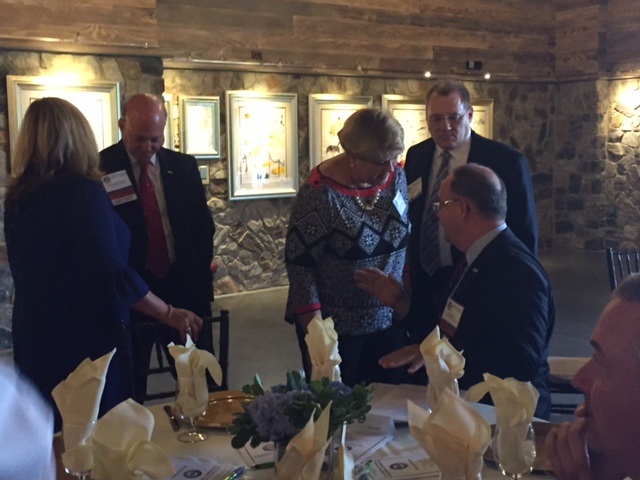 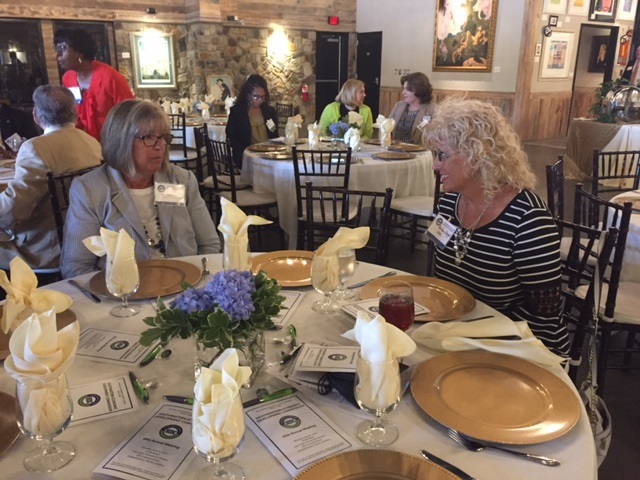 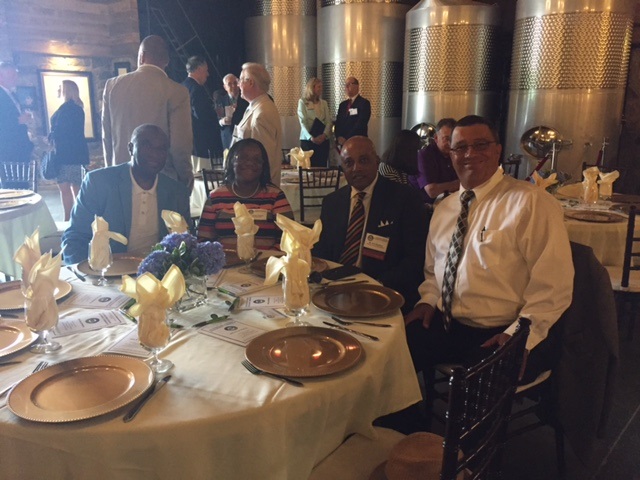 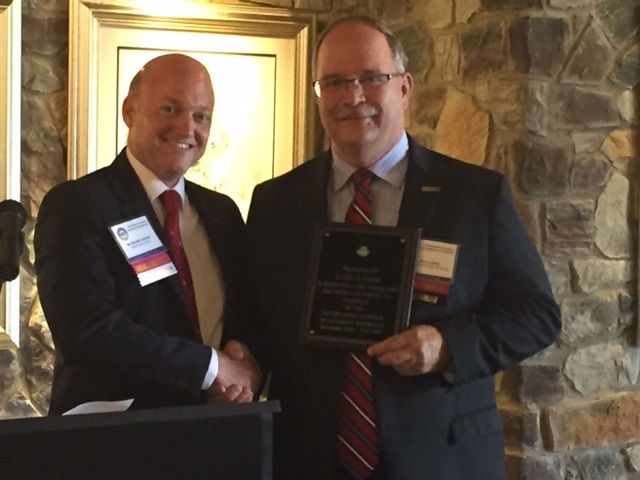 The Southeastern Economic Development Commission conducted their 49th annual meeting on Monday at Cape Fear Vineyard and Winery. The keynote speaker for the event was US Congressman Robert Pittenger.

Congressman Pittenger related how he had recently attended a ceremony for a group of Bladen County World War II veterans. “Freedom is a precious commodity. Sometimes you wonder whether we are doing our job in Washington preserving those freedoms,” said Congressman Pittenger.

He said Congress has a clear focus and understanding of what needs to be done. Congressman Pittenger related how he was serving in Washington, DC in 1980 and 1984 when Ronald Reagan was President. He said interest rates were at 21 percent, inflation was high, unemployment was high. Under President Ronald Reagan, federal regulations were reduced or removed, and tax rates were reduced, and it resulted in the creation of 300,000 new jobs, according to Congressman Pittenger.

Pittenger discussed the challenges which are facing businesses from federal government regulations. He told those gathered for the meeting the economy of the United States is “strangled by so much government regulation.” Congressman Pittenger said there are more than 400 regulations which are now in effect due to the Dodd-Frank Bill which was adopted in 2009.  He said these federal regulations have made a “horrendous impact on access to capital in the market.”

Congressman Pittenger said the federal government has imposed numerous regulations on banks. He said as result of the increased regulations there are 40 percent fewer banks in North Carolina today than in 2010. He said the declining number of banks is directly correlated to the compliance costs. Congressman Pittenger said in the past month in North Carolina alone, three banks have merged due to the compliance costs.
“Small business, entrepreneurs, they need capital. They need access to that. They need to be able to go and to build and expand. Frankly that has been the miracle of America. America didn’t become a great country because of a great government. It became a great county because of freedom, because of liberty,” said Congressman Pittenger.

He said Congress is working to reduce the regulatory burdens which have been placed on businesses. pass 14 major reforms reductions in regulations that help small businesses. “We are doing everything possible we can to pull the reins back and let the people of America continue to grow,” said Congressman Pittenger.

Congressman Pittenger said Congress adopted the first reform in 50 years on Medicaid was recently passed. He said the reason Congress is returning oversight of Medicaid back to the states is for accountability. Congressman Pittenger siad the goal is to have a financially accountable system.
He said immigration is also an issue which is being studied. He said Congress is fully committed to securing our nation’s borders.

He announced Congress has appropriated $70 million for combatting opioid abuse and mental health. This is “over and above” $5 million which has been appropriated for opioid addiction treatment.

Marty Cook, a businessman from Ocean Isle Beach who was in attendance, shared an ordeal his company had with the Environmental Protection Agency. Cook said he owns a real estate firm in Brunswick County and the EPA office in Atlanta, Georgia, tried to close his business because a lid was left off a can of latex paint.

Cook said he had hired a painting a contractor to paint the offices of his business and the painter had left the lid off a can of paint while he had gone to lunch. Cook said the EPA officials told him when there are paints, a can of WD-40 or other chemicals being used inside the business, employees must be given as much as 72-hours notice and a copy of the safety data sheet for the products being used. He said he now has such items on shelves in one room of his building with numerous warnings posted. Cook said such regulations are burdensome for private businesses.

After hearing Cook’s story, Congressman Pittenger said Congress has reduced EPA’s funding by $400 million over the past two (2) years. He said the federal government has enormous “over-reach.”

Pamela Bostic discussed the Community Economic Development Strategy (CEDS) which SEDC is working to create. She said this will be a new five-year plan from which SEDC can work. The CEDS will identify competitive advantages, key trends, promote collaboration, and tells the story of the region’s past, present and future.

“Many of you are already engaged in this process but I encourage all of you to participate in the upcoming CEDS visioning and strategy meetings,” said Bostic.

Bostic emphasized the CEDS will help members when they are competing for Economic Development Association infrastructure and economic development grants.

“The commission is committed to job creation and investment and brining forth more economic development projects potentially eligible for grant funding through the US Department of Commerce Economic Development Administration,” said Bostic.

Gary Lanier gave the Board of Director’s report. Lanier said in the past year $1.6 million were awarded to the region. He said Sampson County received a grant for a were project for the Enviva plant which manufactures wood pellets which can be utilized as coal substitutes.

He said SEDC received a grant of $200,000 to help with the recovery from Hurricane Matthew. All totaled, since SEDC’s inception in 1968, there have been 167 projects and $90.2 million in economic development grants received.