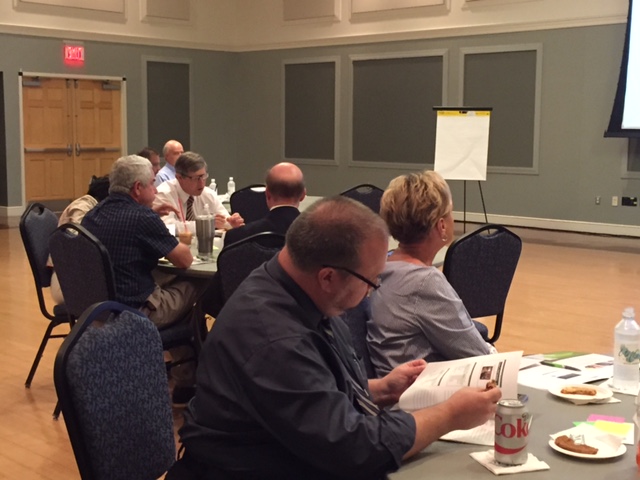 Two more CEDS sessions are planned for Thursday in Laurinburg at the Scotland County Small Business Innovation Center in Conference Room B and Friday at the Cumberland County Public Library in Fayetteville.

The sessions are planned to gather input from the various stakeholders in the 12 county region served by the Southeastern Economic Development Commission (SEDC) which will be utilized to create a regional plan of action. Those 12 counties include Bladen, Sampson, Harnett, Cumberland, Columbus, Pender, Brunswick, New Hanover, Robeson, Scotland, Hoke and Richmond. The region is very diverse and also includes Fort Bragg, said SEDC Executive Director Pamela Bostic.

Bostic said the CEDS document is a requirement needed to apply to the North Carolina Economic Development Association for funding for Public Works or Economic Adjustment Assistance programs. Those gathered for Wednesday’s session discussed various strategies and goals they felt would provide the greatest impact for the region. Bostic said this year the CEDS document will be aligned with NC Tomorrow which is a statewide economic development plan created by the North Carolina Association of Regional Councils of Governments.

Bostic said a SWOT analysis was performed in March and from that session, a list of the region’s strengths and weaknesses was created. SWOT is an acronym for Strengths, Weaknesses, Opportunities and Threats.  Bostic said the CEDS committee had created a set of 5 goals based on the information received in the SWOT analysis. They include:

The group gathered suggested a 6th goal be added to include the expansion of existing industry. The group than conducted a brainstorming session for each goal and presented potential strategies to achieve them. One common theme throughout the discussion was education. The group learned CNBC has ranked North Carolina as No. 5 in the United States for business but ranks the state 32nd for education.  It was determined by the group that education and affordable housing should be key elements to be included in the plan.

One issue which generated a lot of discussion was the need for a quality, modern workforce. Examples given included employees who were not adequately trained or had no work ethic. “It’s been 15 years since I’ve first heard this. I think it’s worse now then ever before,” said Bladen County Economic Development Director Chuck Heustess.

Bostic said the vision statement for the CEDS document is in the process of being created by the CEDS committee and input from today’s session will be utilized in creating the document. She explained to the group one difference they will notice in this year’s plan is it will move away from the project lists that were included in past plans.