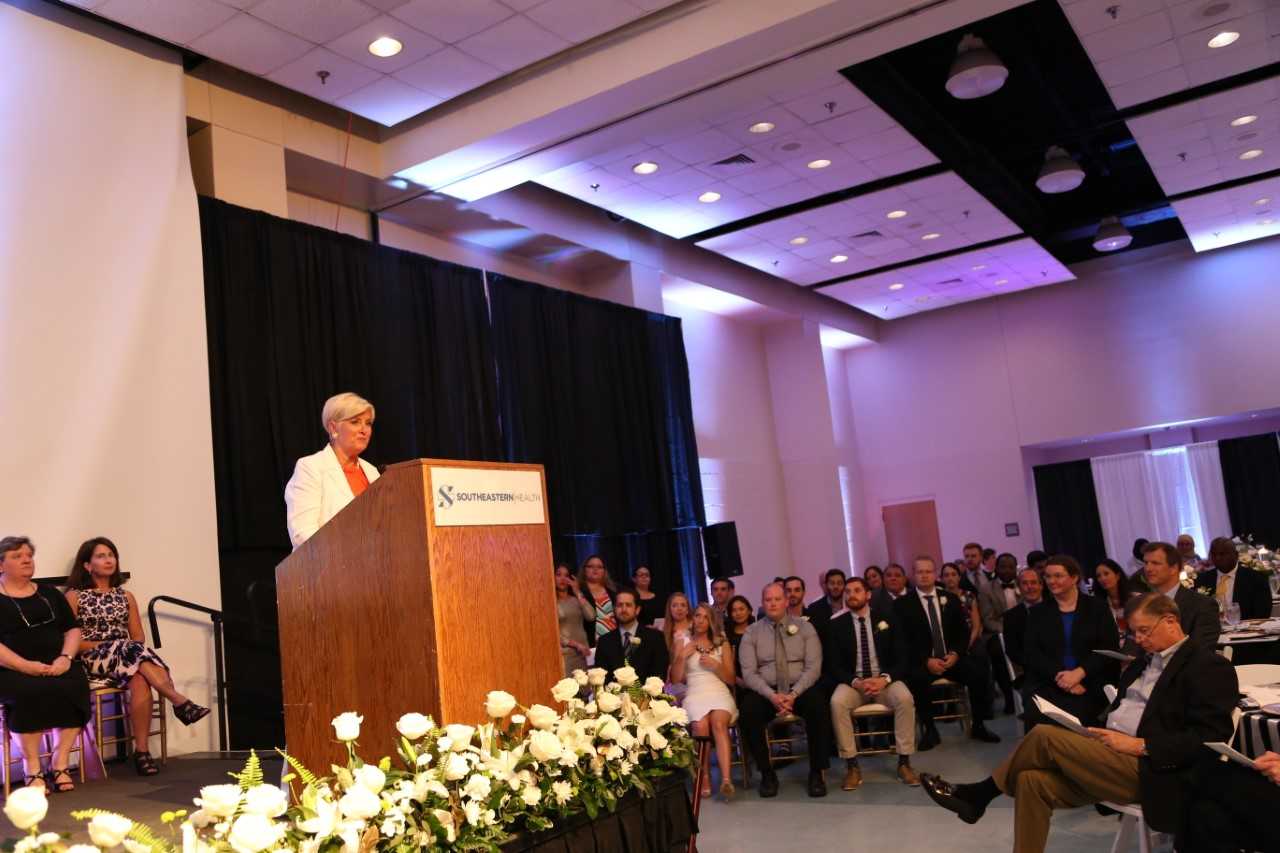 Southeastern Health celebrated its first medical residency graduates Friday, June 22. The ceremony, which was held at the Southeastern Agricultural Center, recognized the 26 graduating residents who completed their residencies at SeHealth in either emergency medicine, family medicine, internal medicine, or a traditional rotating internship.

“We are extremely excited and proud, yet humbled to present the first resident graduating class to the region,” said Vice President of Medical Education Dr. Patricia Matto. “Their sincere desire to improve themselves to better serve and care for their patients in this community cannot be overstated. Not only did they provide quality and compassionate healthcare, but they provided humanistic care to the community, especially during and after Hurricane Matthew in October 2016. We sincerely thank the many people who made this possible and the residents’ families for trusting us to teach the next generation of physicians.”

“This first class represents a milestone for Southeastern Health, Campbell University and rural community hospitals,” said SeHealth President/CEO Joann Anderson. “There is a huge deficit in providers for rural communities. This class marks the beginning of training individuals in our area who can provide hope for health care in the future. This is a success story for everyone involved in what started as a dream. This class has built a strong foundation for future classes.”

Honor Sanderford, the administrative director for SeHealth’s Medical Education Department, is also the program coordinator for the traditional rotating internship. She said that there are now 76 residents at different stages of their programs working at SeHealth.

“We want to train rural health physicians as that’s where the biggest need is in the U.S.,” Sanderford said. “Four of the residents who are graduating will be staying with Southeastern Health, two as hospitalists, one as an internist at the Gibson Cancer Center, and another as an emergency medicine physician in 2019.”

Longtime Lumberton provider Dr. Gerard Devine, who is an attending physician for the internal medicine residents at Lumberton Medical Clinic, said he is proud and pleased with what he’s seen from the residents.

“This resident program is probably the best thing to happen to the medical staff since I came here in 1978,” Dr. Devine said. “We now have a constant pipeline of well-trained physicians coming to us.”

Residencies are where medical school graduates hone their skills to be independent physicians in a hospital or outpatient office setting. As well as learning from the doctors here, the residents have also been providing additional care to the community.

“It’s exciting to be at the ground floor of what is an exceptional residency experience,” Sanderford said. “Working with rural health populations, you see a lot of disparities throughout the U.S. These residents have learned how to serve as a primary physician for all of the diagnosis they’d see in practice, rather than learning how to send patients to a specialist, which in some rural locations may be much farther away.”

“All I hear is positive feedback from the community,” Dr. Morando said. “This is a very bittersweet time for me, because this pioneer group of residents have been such a tremendous group of people. They’ve had camaraderie and been real close to each other. They’re constantly helping each other out. I couldn’t have asked for a better, close-knit group for our first cohort.”

“Getting their input was imperative to the first three years of this program,” Dr. Morando said. “Their help and suggestions helped shape the program. I’m so happy to see them succeed, getting fabulous job offers and prestigious fellowships. That also reflects positively back on our program.”

Dr. Byron Ingram, 31, is one of the residents who graduated from the internal medicine program. Originally from Trenton, N.C., he went to North Carolina A&T State University before going to medical school at Edward Via College of Osteopathic Medicine’s Carolinas Campus in Spartanburg, S.C. He will continue to practice in the region at a neighboring hospital.

“It was a trying but welcome task to help get the internal medicine residency program at Southeastern Health established,” Dr. Ingram said. “We were able to integrate into the community and also educate them about health care. Training in this community allowed us to become very efficient and competent in treating a wide array of pathologies. I’m glad that I had the opportunity to train in this community and glad the community was receptive to allowing us to take care of them.”

Family Medicine Resident Dr. Meredith Beeler, 29, is from Akron, Ohio and will be joining Adventist Hospital in College Park, Md. after graduating. She graduated from Walsh University in Canton, Ohio, and went to medical school at West Virginia School of Osteopathic Medicine in Lewisburg, Va.

“Our residency was challenging because it was new, but it was also exciting,” Dr. Beeler said. “There was a lot of pathology here to learn about, some of which I didn’t think I would ever see in my lifetime. Dr. Morando, our program director, was always very supportive, and all the other residents have been amazing.”

Dr. Boris Calderon is one of the internal medicine residents who has signed on to stay with SeHealth as a hospitalist. He received his undergraduate degree from Western Carolina and his medical degree from Edward Via College of Osteopathic Medicine’s Virginia Campus in Blacksburgh, Va.

Originally from Rochester, N.Y., Dr. Calderon has lived in Fayetteville since the early 1990s, when he got out of the military as a medic. He then spent 18 years as a paramedic in Cumberland County. He said he was glad to find a residency program, and now a job, so close to home.

“My wife is local, so this region is our home,” Dr. Calderon said. “During medical school I did rotations here, so it was a well-matched opportunity to do my residency here. It’s been an enjoyable experience. The people who I worked with, my other residents, my classmates and the junior residents, they’re really a talented bunch of young people. They’re very well educated, very dedicated to what they want, and it’s been fun watching them develop.”

Some of the program’s residents and attending physicians were also recognized with special awards during the graduation dinner and ceremony. The awards were given as follows:

Emergency Medicine of the Year: William Gartlan, DO

Family Medicine Resident of the Year: Timothy Taylor, DO

Internal Medicine Resident of the Year: Jonathan Blandford, DO

Traditional Rotating Internship Resident of the Year: Katherine O’Connell, DO

Emergency Medicine Attending of the Year: Elizabeth Gignac, DO

Family Medicine Attending of the Year: Donald Morando, DO

Traditional Rotating Internship Attending of the Year: Sid Hosseini, DO