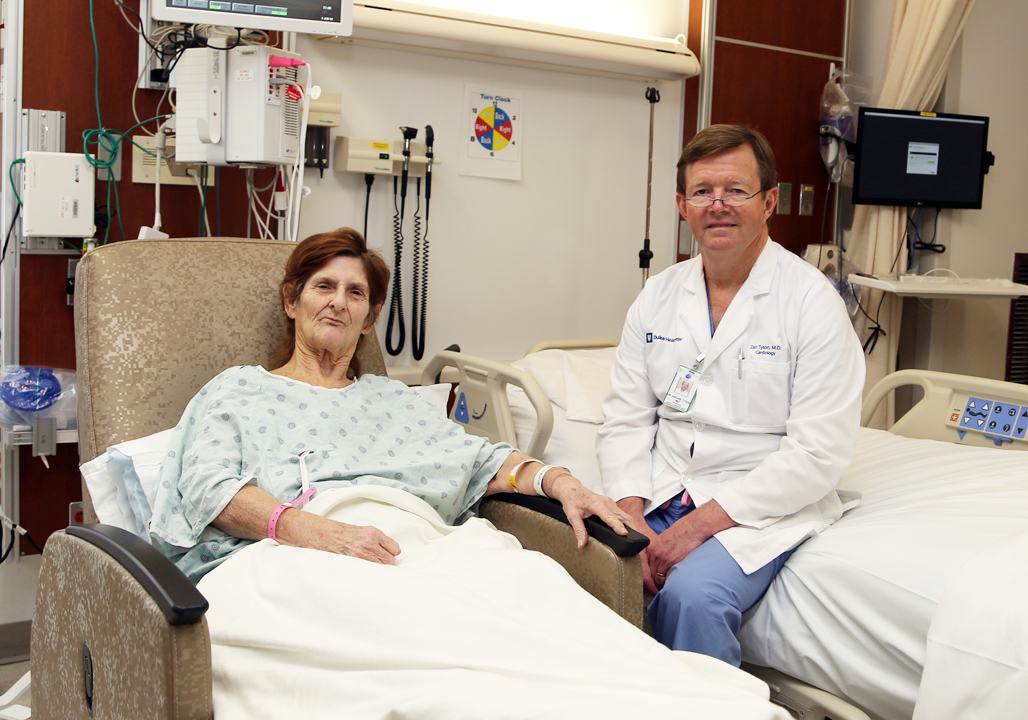 Dr. Archie “Zan” Tyson has brought a new procedure to Southeastern Health that is expanding the treatment options for local cardiac patients. Cardiac ablation is a safe and tested procedure that has been practiced regularly in the United States for many years but has never before been offered at Southeastern Regional Medical Center (SRMC). It is but one part of a rapidly expanding electrophysiology program, complementing SeHealth’s already extensive array of services.

Dr. Tyson performed SRMC’s first atrioventricular (AV) node ablation on Jan. 2 on patient Karen Wright, a 68-year-old Lumberton resident who has a pacemaker but has still been suffering from atrial fibrillation (AFib).

“Her procedure went routinely, and she had excellent results,” said Dr. Tyson, who is a Duke Health- affiliated cardiologist at Southeastern Cardiology and Cardiovascular Clinic and Southeastern Health Heart and Vascular.

Wright, who spent a night in the hospital after the procedure, was happy to talk about her progress the next day while she was waiting to be discharged. Wright is also a retired Southeastern employee who used to work in patient placement in the emergency room.

“I feel great,” Wright said. “I can tell this worked. Before, my heart was always racing, and I was tired. I’ve been exhausted since September, but today I’m not tired and my heart isn’t racing anymore. Dr. Tyson has been very good at explaining every detail to me, and the nurses have been wonderful, too.”

Wright’s experience was typical for the procedure, which involves catheterization under sedation for less than an hour while a medical team maps the misfunctioning nerves on the heart and systematically zaps them with a radio frequency(RF). The radio waves cauterize the specific problem-causing nerves, causing the heart’s muscles to return to normal rhythm.

Wright said she was ready to get back the energy she needs to play with her 7-year-old grandson, who lives with her. Before, she was unable to run or ride bicycles with him, but she hopes to get her strength back soon and get back to normal.

“I want to do all I can to live longer with him,” Wright said. “To me, this was the only choice.”

The AV node ablation procedure is just one type of cardiac ablation, and SeHealth is planning to offer more in the near future. SeHealth Heart and Vascular Director Chad Carpenter explained that procedures dealing with the heart’s electrical system are mostly a new area for SeHealth’s patients, aside from installing pacemakers.

“Regular cardiology deals with blocked vessels that bring blood to and from the heart, but electrophysiology deals with the electrical response that makes the heart pump,” Carpenter said. “Now we’re moving toward introducing a new concept called cryoablation, which is faster, only about an hour and a half long procedure, and then we’ll expand into RF ablation, which uses radio frequency to continually scan the heart rather than using a catheter to map it.”

The other methods of ablation will allow more complex ablation cases to be handled at SRMC.

Dr. Tyson said most people know if they have AFib, also called atrial flutter or ventricular arrhythmia, either because of family history or conversations with their medical provider. Patients with AFib can have no symptoms, or they can have palpitations, fatigue and shortness of breath. It can also cause clots to form and be pushed through to the brain, causing a stroke.

“Electrophysiology issues affect about 40 percent of our population,” Carpenter said. “It’s not dangerous until it’s persistent. Then it can lead to tachycardia, which is when the heart rate is too fast or when the heart beats out of normal rhythm, which can again cause clots to form and increase the risk of stroke.”

Dr. Tyson estimates he has performed more than a thousand cardiac ablations in his almost 30-year career. He said he is very excited that local patients will now have easier and better access to treatment of heart disturbance close to home.

“This procedure can fix AFib and prevent more serious problems AFib can cause. When medication is no longer effective, then it’s time to try ablation,” Dr. Tyson said. “It’s for patients whose condition is progressing, leading to blacking out, or their heart racing, or the uncomfortable, sometimes scary out-of-rhythm sensations.”

To make an appointment with Dr. Tyson, patients can self-refer to Southeastern Cardiology and Cardiovascular Clinic, located in the Southeastern Health Mall on the campus of Biggs Park Mall at 2934 North Elm Street, Suite 103, in Lumberton, or ask their primary care physician for a referral. For more information or to schedule an appointment with Dr. Tyson, call (910) 671-6619.  Patients who are experience alarming discomfort should go directly to the Emergency Department.

Published in Health, News and Regionals