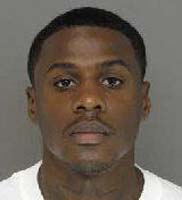 Douglas, 27, was sentenced to a minimum of 139 months and a maximum of 179 months in prison, a news release from the Bladen County District Attorney’s Office said. He pled guilty to armed robbery, two counts of second degree kidnapping and possession of a firearm by a felon.

The robbery took place on Oct. 8, 2017 about 9:40 p.m. when authorities say that Douglas entered the store on North Main Street wearing a Halloween mask and bright neon gloves. Surveillance video showed Douglas holding two employees at gunpoint while he took money from the cash register.

A witness sitting in a car in the store’s parking lot saw the robbery taking place and dialed 911. As officers raced to the scene, Douglas ran into a wooded area behind the store.

During a search of the scene, detectives found a rental car that was registered to Douglas. Officers also found in the woods behind the store the mask, hooded sweatshirt and gloves that Douglas was seen wearing during the robbery. DNA testing of the gloves matched Douglas.