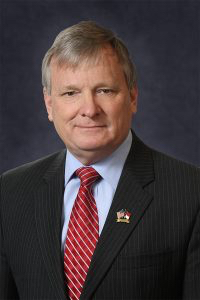 State Health Plan to Include Major Hospitals for 2020

State Treasurer Dale Folwell announced Thursday that the state’s health insurance plan will include major hospitals in the state as in-network providers next year as part of the Blue Options Network and the new State Health Plan Network. The State Health Plan covers more than 727,000 teachers and state employees.

Blue Cross Blue Shield of North Carolina will continue to administer the network, according to a news release from the Treasurer’s office.

Folwell (pictured) announced the Clear Pricing Project in October 2018 in an effort to cut $300 million from the $3.3 billion spent annually for the state’s health insurance plan, Folwell’s office said. More than 28,000 medical providers, including five hospitals, had committed to the plan which, Folwell’s office said, provided open contracts and lower prices.

The plan would pay all providers across the state at a set rate based on federal Medicare rates. According to Folwell, the plan’s final proposal increased payments to medical providers, on average, from 182 to 196 percent of Medicare. Urban hospitals saw their combined inpatient/outpatient ratios go from 178 to 200 percent of Medicare on average.

However, only five out of more than 100 of the state’s major hospitals agreed to the new plan.

The Clear Pricing Project does not impact retirees on the UnitedHealthcare Group Medicare Advantage Plans, the news release said.

The spending reductions are needed because medical and pharmaceutical spending is increasing 5 to 9 percent annually while state government has provided 4 percent increases year-over-year, according to Folwell’s office. The Treasurer’s office said that at current spending rates, it’s estimated the state’s plan will run out of money by 2023.

“The Clear Pricing Project is just the beginning,” Folwell said. “I appreciate that 28,000 providers – independent primary care providers, behavioral health providers, independent provider networks and the 5 courageous hospitals – have chosen to provide care to those who serve in state government. These medical providers should be applauded.”

The more than 28,000 providers that signed on to the Clear Pricing Project will eventually be offered the opportunity to participate in alternative payment arrangements, Folwell said. These arrangements, or models, include medical-procedure “bundling,” Accountable Care Organizations, as well as other outcome and evidence-based programs designed to deliver quality care at affordable prices.

“We look forward to working with Treasurer Folwell and the State Health Plan to implement these changes and ensuring that teachers and state employees have uninterrupted access to quality care,” Blue Cross NC President and CEO Patrick Conway said.

Dee Jones, who is the executive administrator of the health plan, said the financial crisis has not changed.

“I could not be more proud of what the staff at the State Health Plan has accomplished,” Jones said. “We created a brand-new network of 28,000 providers from the ground up. The goal going forward is how do we leverage that network to sustain the Plan by reducing costs through alternative payment arrangements while, at the same time, establishing medical pricing transparency so consumers can make informed decisions when purchasing health care.”