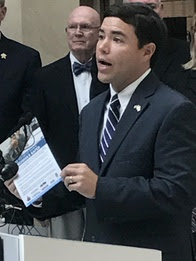 State Superintendent Mark Johnson announced today that the state is the recipient of a $2 million federal grant to aid continued recovery efforts from hurricanes Florence and Michael, both of which caused damage to schools across the state. The funds will restore learning environments in 271 schools in 12 school districts and one charter school, helping more than 130,000 public school students.

“We are grateful to the U.S. Department of Education for recognizing the impact that these storms continue to have to students and educators in North Carolina,” Johnson said. “A violent storm is disruptive and can have a long-lasting, traumatic effect on students and affect their academic performance and mental health. These resources will help us ensure these schools continue to be the anchor of their communities.”

Funds from the grant will be awarded to the following school districts and charter school:

The grant will fund projects such as rebuilding playgrounds, transporting students displaced by the storm to allow them to continue attending their home schools, pay to those who worked tirelessly to preserve and restore school facilities and learning environments, and providing additional instructional time. These funds are in addition to funds from the Federal Emergency Management Agency, insurance claims, Florence Aid to Students and Teachers of North Carolina (FAST NC) and those appropriated specifically for hurricane recovery by the North Carolina General Assembly, and can be used to reimburse recipient entities for expenses already incurred.

The source of the additional financial support is Project SERV (School Emergency Response to Violence and Disaster), a fund established by the U.S. Congress and provided through the U.S. Department of Education, originally in response to the Columbine, Colorado, shooting incident of April 1999. Project SERV was established initially to support schools following a traumatic event that had significantly disrupted a school’s routine functioning through an act of violence. Following Hurricane Katrina in 2005, the circumstances covered by Project SERV were expanded to include natural disasters.

The Department of Public Instruction’s divisions that are focused on curriculum and federal programs, led by Christie Lynch Ebert and Michael Wells, respectively, submitted a statewide application for the SERV grant on behalf of the districts and charter school.

“I thank Michael, Christie and their teams, as well as the local superintendents and charter leaders, for their work on behalf of our students and educators,” Johnson said. “We pledge to disburse these funds quickly to these well-deserving schools.”