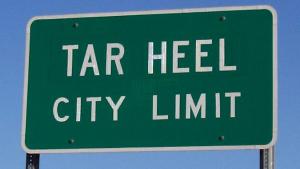 With Councilmember Angie Hall continuing AWOL, the Tar Heel Council held a public hearing on Tuesday, April 27th, to hear citizen comments on a proposed ordinance to amend the Town Charter, specifically calling for concurrent four-year terms for the Mayor and Council members.

Mayor Sam Allen called the meeting to order at 6:04 pm. The Pledge of Allegiance was recited, and Mayor Allen offered the invocation.

The Mayor welcomed Brendaly Vaga Davis to the meeting. She announced that she was the new municipal reporter for the Bladen Journal, replacing Emily Williams; Ms. Williams had transferred to the Sampson Independent in Clinton, while Ms. Vaga Davis transferred from there to the Journal.

To bring Ms. Vaga Davis up to speed, Councilmember Mike Underwood explained that the key reason for the change was economic: With a $40,000 budget, the $1,800 cost to hold an election comes to 4.5% of the Town’s budget every other year; the Charter change will result in an $1,800 savings between elections.

Mr. Underwood started to expound on the prospects for a craft show; however, he was reminded that only the public hearing on the Ordinance was allowed to be discussed in the special meeting.

He then made a motion to adjourn, which was seconded by Councilmember Derek Druzak. The public hearing itself officially ended at 6:14 pm.

Mr. Underwood then informed the two reporters present about the “First Annual Tar Heel Craft Show.” This event is planned to be held Saturday, June 26th, between 8 am and 2 pm. Thus far, twenty-five craft vendors have already signed up to show their craftworks.

In addition, a silent auction is planned to be held in the community chambers. In lieu of being charged a booth fee, each vendor will be donating selections of their craftwork for this auction. Not yet set in stone, Tar Heel Dixie Youth Baseball League will perhaps be selling hot dogs as a fundraiser.

Stay tuned to this page for additional information as it becomes available.

When this article was first published it had the wrong date for the First Annual Tar Heel Craft Show.