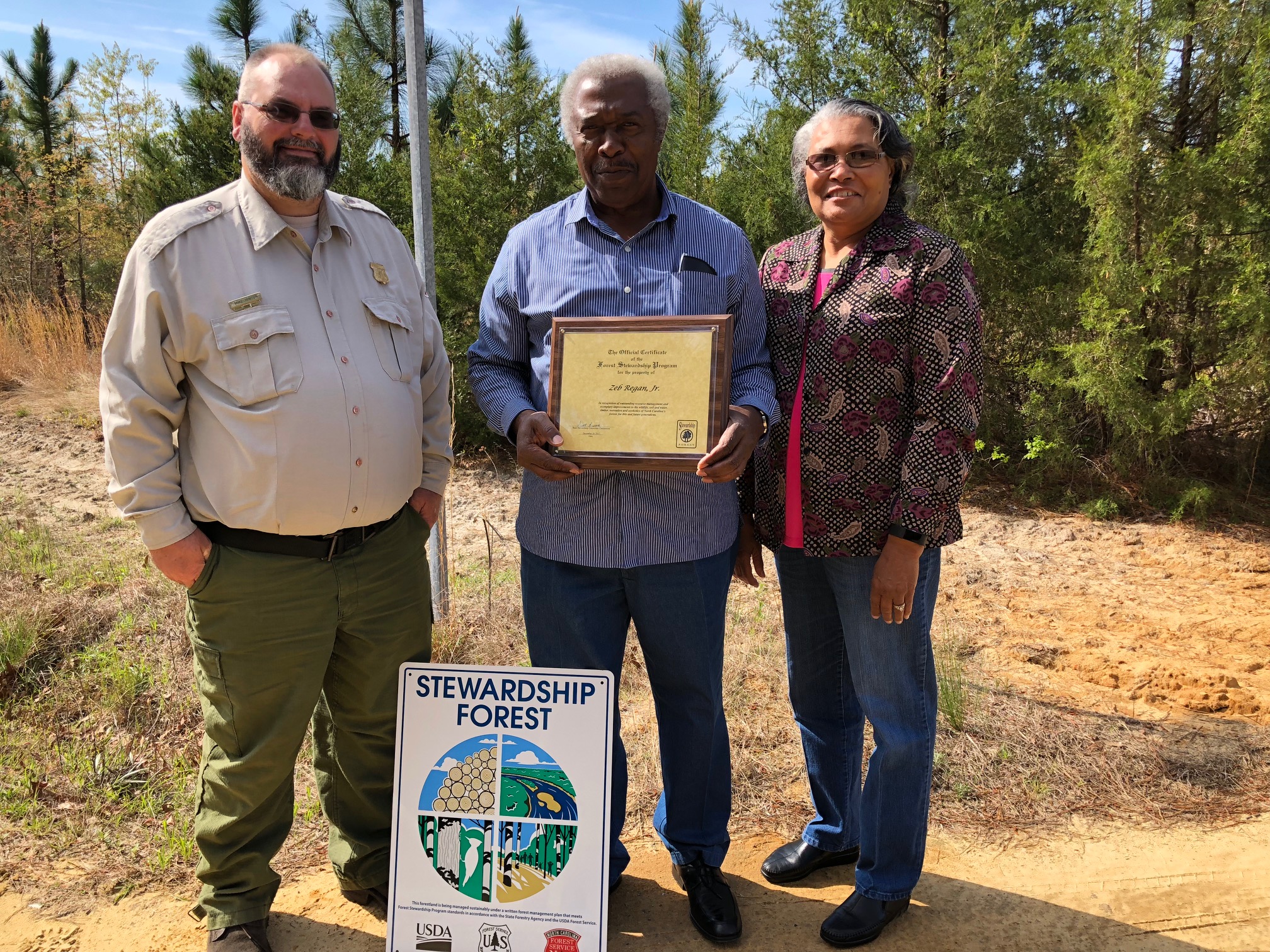 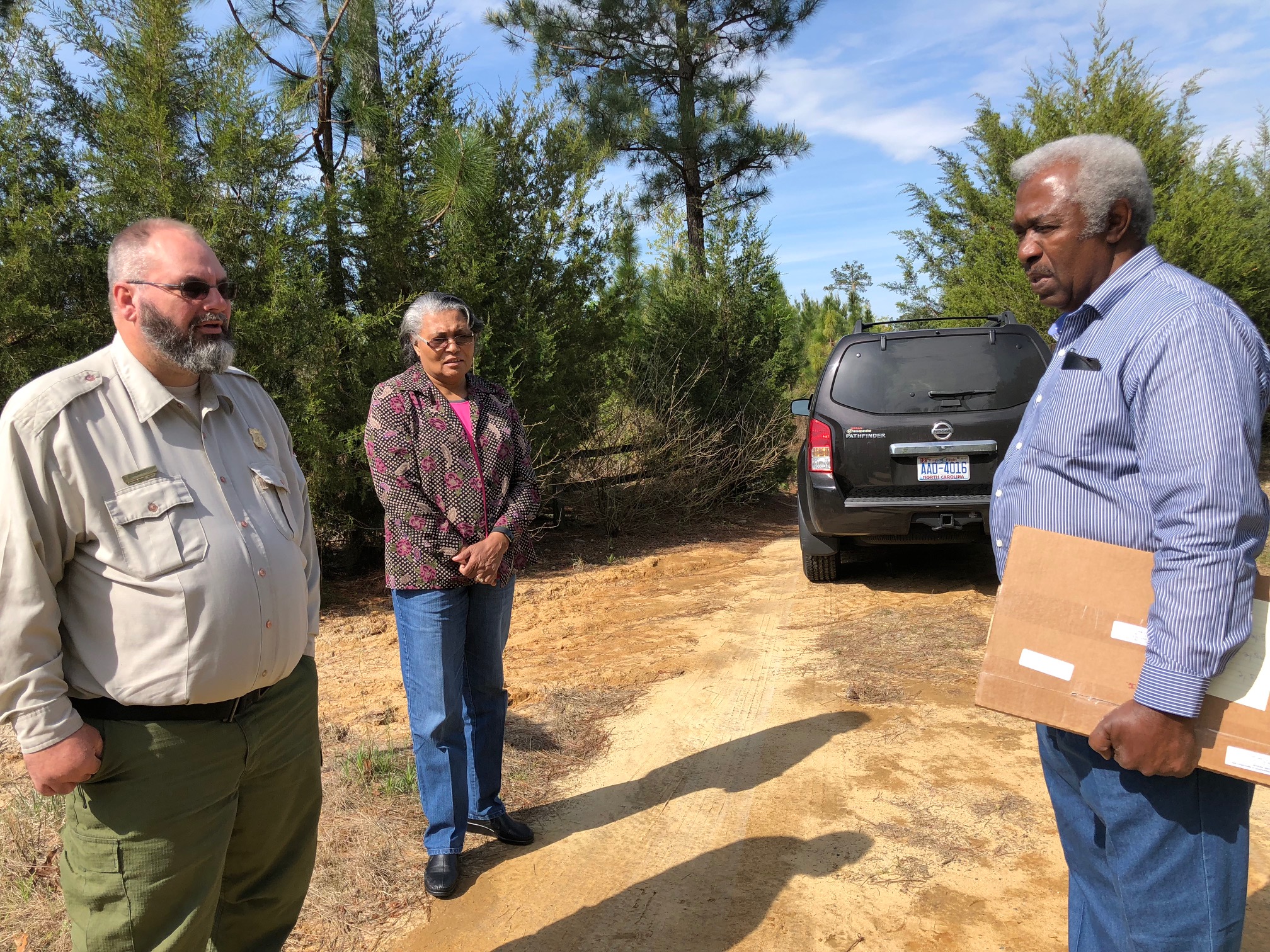 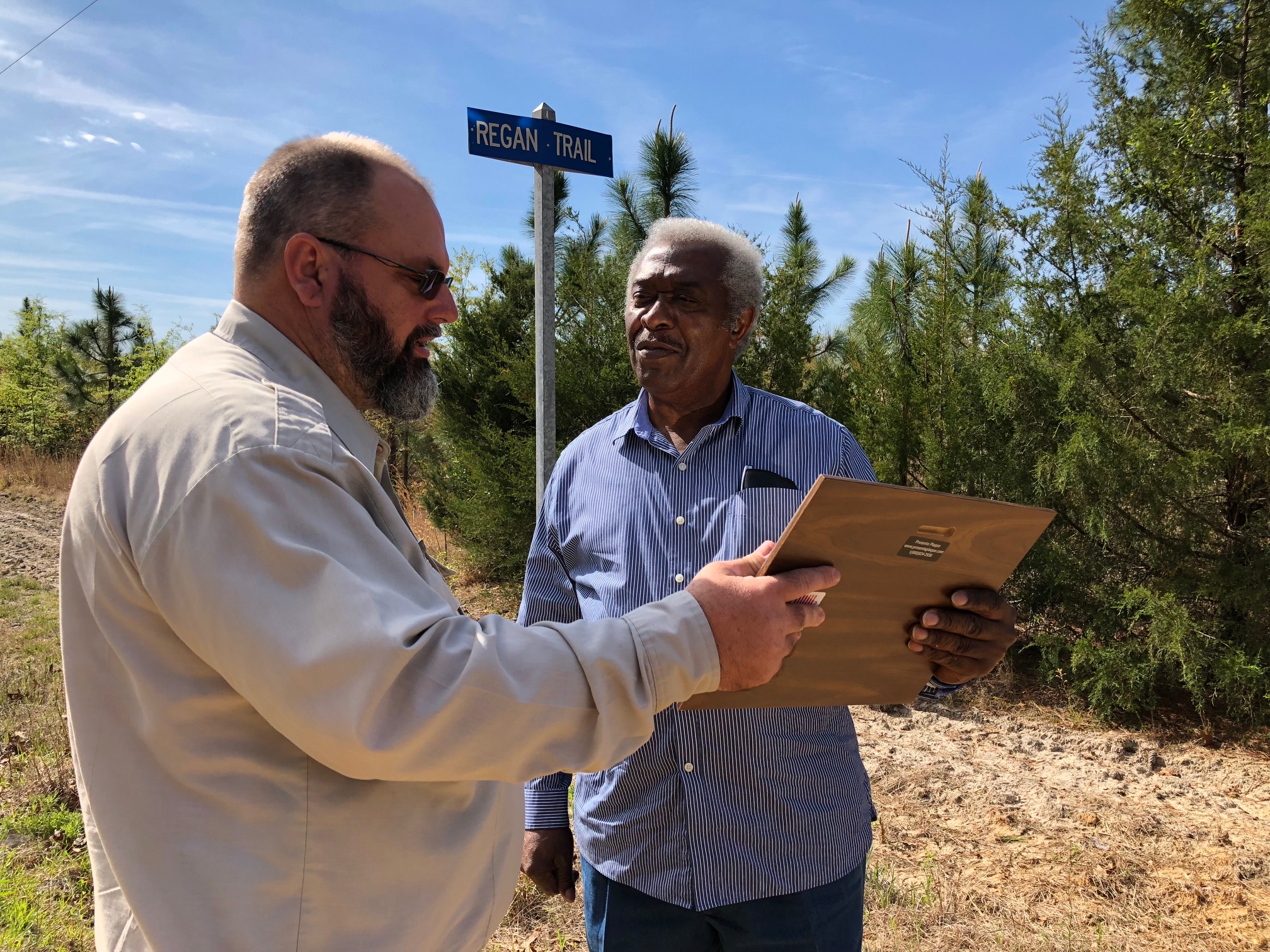 A Tar Heel landowner received a surprise from the NC Forest Service on Thursday morning as he was recognized for his work in sustainable forestry. Forester Michael Hinson presented Zeb Regan Jr. and his wife, Mavis, with a plaque and a metal Sustainable Forestry sign in recognition of his conservation efforts at their Reedy Meadow Road tract of land.

“Thank you for your continued commitment to sustainable forestry,” said Forester Michael Rhodes.

The two are being recognized for their work to get their land recognized as a Stewardship Forest according to Brian R. Haines, Public Information Officer with the N.C. Forest Service. The Forest Stewardship Program is a voluntary program that recognizes and helps woodland owners with their management objectives and forest resource management.

Haines explained landowners receive technical assistance in developing a stewardship management plan that is based on their goals and activities and are scheduled to enhance the forest for wildlife, soil and water quality, timber production, recreational opportunities, and natural beauty.

Regan was surprised by the honor. He said when Hinson said he wanted to meet with him on the tract of land off Reedy Meadow Road with a surprise, Regan wondered what kind of surprise Hinson had.

Regan said he guessed all manner of things but not the Sustainable Forestry recognition.

Hinson explained to Regan that he was one of the first landowners Forester Laura Prevatte worked with in Bladen County.

“She retired in December and one of the last things she wanted was to make sure you became a stewardship landowner,” said Hinson.

Rhodes explained Prevatte recognized Regan’s commitment to conservation and sustainable forestry and she wanted to recognize that. He said she submitted Regan’s information for recognition and he was chosen for the honor.

Regan said the Reedy Meadow Road tract consists of 63 total acres and  has been in his family for a number of years.

“When I took it over and tobacco crops went out (due to the tobacco buy out) the fields started growing up, and I was trying to find a way to make them productive,” said Regan.

He said he spoke with a ranger about possible options for the land. Regan said that is when he got involved with the North Carolina Forest Service’s Conservation Reserve Enhancement Program or CRP.

Regan said the NC Forest Service’s woodland program has helped in a lot of different ways from assisting with taxes due to participation in the CRP program and providing information and guidance as far as stewardship of the land.