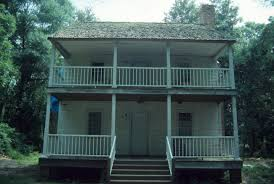 WHITE OAK — A portion of the grounds at Harmony Hall Plantation Village will be transformed into an early 18th century setting on Saturday and Sunday when Brian Avery creates an area to demonstrate the production of tar, pitch, turpentine and rosin.

The event, which will begin at about 9 a.m. both days, will be free and open to the public.

“This will really be something interesting to see,” said Bobby Lewis, field marshal at Harmony Hall. “I think people will enjoy seeing this.”

Avery, considered a “Road Scholar” by the North Carolina Humanitarian Council, won’t only be demonstrating the old-timey process, he also plans to tell the story of the early Tar Heels.

“The tar business began in North Carolina at about 1705 using the dead long-leaf pine,” Avery said. “There is a long and interesting history behind those original Tar Heels.”

The demonstration for producing tar, pitch, turpentine and rosin won’t be exactly like the 18th century Tar Heels did it.

“It would take them the better part of two weeks to do that back then,” Avery said. “But we’ve narrowed that down quite a bit to about 90 minutes.”

Avery said he and those with him will be dressed in period clothing and plan to work with some of the original tools used in the early 1700s.

Harmony Hall Plantation, which was built in 1760 by Revolutionary War Col. James Richardson for his family and is one of the oldest homes in North Carolina, operated as a tar-pitch plantation in the years following the war with Britain.

“You have to remember it was real wilderness back then,” Avery said. “Pretty hard to imagine now, but there was nothing more than trees and the river in that area.”

Avery said the weekend demonstrations will be the first of their kind for one reason.

“We’ve never done this in the heat,” he said. “This is usually a fall and winter project for us, so it will be interesting to see how it goes in the summer heat.”

Avery added that, while the demonstrations will begin at about 9 a.m. each day, the crew may take a break during the hottest part of the day before starting up again later in the afternoon or evening. he said the demonstrations would go on until dark.

Avery also said the demonstration has been the focus of a video, paid for by the state, and is available to school districts throughout North Carolina for educational purposes. To inquire about the video, call the N.C. Humanities Council at 336-334-5325.