Bladen County Schools Supt. Dr. Robert Taylor on Monday told the Bladen County Board of Commissioners that reduced state funding, a delayed state budget, charter school payments, and a drop in enrollment are among the reasons the school system has transferred $1.2 million from the capital outlay fund in order to meet current operating expenses.

The move drew the attention of commission chairman Charles Ray Peterson, who expressed his concerns in a letter to Taylor in February.

“The main reason (for the transfers) is that we have educational mandates that remain in place and they must be met,” Taylor told the board. “They require the district to have adequate funding.”

“The problem is that most districts are in a position where they are not able to grow a fund balance as we’ve done in the past,” Taylor said. “When we continue to have mandates, we want to make sure that schools have the adequate resources to function. We find it necessary to transfer those funds.”

Sharon Penny, who is the school system’s director of finance, told the commissioners that payments to charter schools is expected to be about $485,000 this fiscal year, which is more than double from two years ago. There are between 4,600 and 4,700 students enrolled in Bladen County public schools.

“The last two budget cycles have been somewhat unusual for school districts,” Taylor said. “The state did not approve the (current) budget until August. I think we actually received it seven or eight days before school started. It was the same thing the previous year.

“The problem is that at some point we have to make a commitment to schools well before the August time frame,” Taylor said. “By the time those budgets came down, we either had to cut people a week before school started or we give the schools the resources necessary to function.”

While Peterson said he understood the funding issues faced by the school system, he said that it was “alarming” that money allocated for infrastructure improvements had been put into the general fund, especially since the school system has brought up many capital needs.

“While the state funding has declined, (Bladen) County funding has not declined,” Peterson said. “The Board of Commissioners have made a good faith effort over the past 8 to 10 years of increasing funding to Bladen County Schools.

“As simple as it might be,” Peterson said. “Bladen County is not in a financial position to supplant state funding to Bladen County Schools.

“We, as commissioners, understand the responsibility we have to be good stewards of taxpayer funds, and we must manage within our respective budgets,” Peterson said. “What the commissioners approved (for the 2014-15) budget is what your budget is, and that’s what you have to operate under.

“Even though many counties reduced funding for school systems, Bladen County chose not to do that. As board members, we will continue to support Bladen County Schools as before,” Peterson said.

In other action, the board

** approved $46,530 in N.C. Education Lottery capital building funds to repair the roof of the Agricultural/JROTC building at Elizabethtown Middle School. Tar Heel Roofing of Fayetteville will do the work. The lottery fund account currently has $1.5 million. 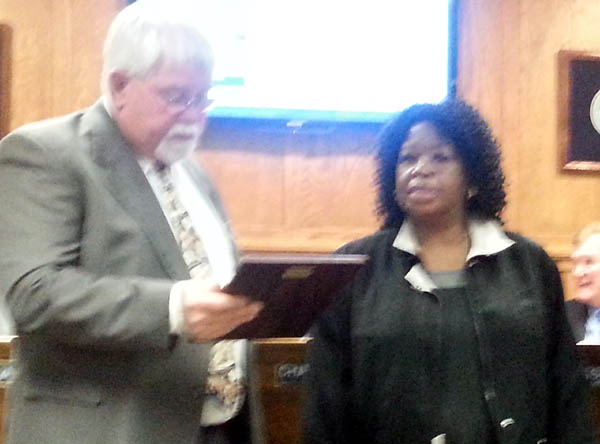 Linda Rogers, recognized who retired March 1 after having served more than 19 years with the Bladen County Sheriff’s Office.

** reappointed tax assessor Chris Ellis to a four-year term. He will be sworn in at the March 16 meeting.

** approved a request from Robert Mazur, director of the General Services Department, to hold a surplus auction of county property April 25 at 11 a.m. at the County Operational Services Building in Elizabethtown.

** approved County Manager Greg Martin to proceed with a program to use inmate labor from the Tabor City correctional facility. The county would use eight inmates at a cost of about $25,000 per year.

** asked Martin to set up a meeting with Bladen County’s state legislative delegation as soon as possible.