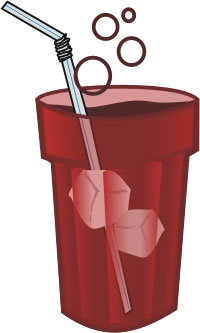 The Top Ten Worst Soft Drinks For Your Health

Coca-Cola Classic is certainly not healthy for you, although there are now many soft drinks on the market that have more sugar and caffeine content. Coke Classic is on this list because it essentially started the soft drink phenomena and is the “face” of the industry.

A 16-oz. can of Rockstar Original contains 151 mg of caffeine and 62 g of sugar. Although this carbonated energy drink contains B-vitamins and herbals, the high levels of caffeine and sugar negate any health benefits.

A 12-oz. can of Sunkist Orange Soda contains 41 mg of caffeine and 52 g of corn syrup derived sugar, which equates to a considerable 4.33 g per oz. Despite its name, it does not contain any real orange juice.

Bawls Geek Beer is a 16-oz. carbonated energy drink that contains 100 mg of caffeine and 72 g of total sugar, which equates to 4.5 g of sugar per oz.

Jolt Cola comes in 23.5-oz. cans, the second biggest in the industry.  A can of Jolt contains 280 mg of caffeine and 94 g of sugar, which is derived from granulated sugar and high fructose corn syrup. Jolt Cola does contain more than twice the caffeine per ounce of its rival, Coke Classic.

A 22-oz. bottle of Rockstar Punched Guava contains 330 mg of caffeine, a massive amount compared to other energy drinks. It also contains 102 g of total sugar, which is the most of any beverage on the market.

The worst soft drink for your health might well be Hype, a carbonated energy drink that contains 160 mg of caffeine in a 16-oz. can and an industry leading 8.4 g of sugar per oz. The sugar is derived entirely from high fructose corn syrup.

Published in Health and Lifestyles